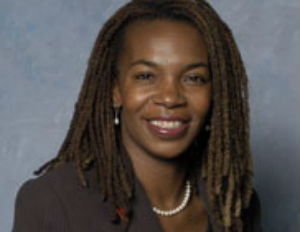 Stephanie Hightower, USA Track & Field (USATF) president,Â was recently elected to IAAF Council, the world-governing body for track and field, a highly powerful position in the sport. She is the first African American woman to be voted into the post and will hold oneÂ of six seats designated to be filled by women.

“I am humbled and thrilled to have been selected to serve on the IAAF Council,â€ Hightower said in a statement. “The United States has worked hard in recent years to step up and serve the sport internationally in the way we should, as the world’s most successful track and field team. I am inspired and excited to embark upon this next phase of service to the sport of athletics and am extremely optimistic about the work the ‘new’ IAAF will undertake in the immediate future.â€

To her position on the council, Hightower brings leadership skills and sports achievement as an Olympian and world indoor and American outdoor record-setter. She was part of 10 U.S. international teams, and later served as U.S. women’s team manager at the 2004 Olympic Games, assistant manager at the 1996 Games, and U.S. team leader at the 2005 IAAF World Youth Championships.

She was elected president of USATF in 2008, and has led the federation’s efforts to improve the organizations efforts to serve athletic programs around the globe, working closely with IAAF leaders as well as colleagues in fellow federations.