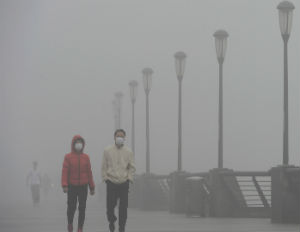 Canadian startup company Vitality Air believes it has found the solution to China’s severe smog problem. Last month the company sold its first batch of 500 canisters of bottled clean fresh air from the Rocky Mountains to Chinese customers. According to CNN, they are now taking orders for the next shipment of 1,000 bottles. Prices vary from $14 to $20, depending on the size of bottle.

Last week, schools were shut down in Beijing due to a “red alertâ€Â from poor air quality, forcing cars off the road. Smog has become a huge issue for the country, but experts believe filtration, not importation, is the solution.

Co-founder Moses Lam stated to the Telegraph, “Our first shipment of 500 bottles of fresh air were sold in four days.”While Vitality Air was founded in 2014 in the Western Canadian city of Edmonton, it only started selling in China less than two months ago. The smog problem in China has become a major issue, causing environmental and widespread health issues.

Just In Time For the Holidays: ‘Black Card Revoked’