Why You Should Go See 'Star Trek Into Darkness' [Review] 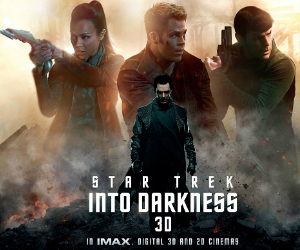 The Enterprise is in flight again! Luckily, although the Star Trek series has a very discerning history via television and in theaters, you don’t have to actually be a Star Trek fan or ‘trekkie’ if you’re up on the vernacular, to enjoy this latest installment.

I don’t think I need to go into the history of Star Trek to let you know why this franchise stays popular. The series has gone through a reboot with a new cast that features young, upcoming stars that should elevate the series to go on for a number of years, if written and done correctly.

The J.J. Abrams-directed film, ‘Star Trek Into Darkness’, brings back the cast of the revamped original series of characters in ‘Star Trek’, originally released in 2009. This marks the 12th Star Trek motion picture and will keep your attention throughout the 132 minute film. But, luckily, the movie is fast moving where you don’t realize that it’s that long, at least in terms of not being bored or uninterested.

Captain James T. Kirk (Chris Pine) and his First Officer Spock (Zachary Quinto) are on a mission of revenge after an enemy, former Commander, John Harrison (Benedict Cumberbatch, who plays this role in such a severe sinister way that he would make Ricardo MontalbÃ¡n, who played the original Khan, wince in fear), later to be revealed as Khan Noonien Singh (Many Trekkies will recognize the name from an early episode in the original Star Trek series and later the main villain in the second Star Trek movie, ‘The Wrath of Khan’), kills several high ranking officers at the Starfleet Command.

Now, although this isn’t officially a ‘remake’ of The Wrath of Khan, you can actually say that it is, with several twists; but, even if you saw the movie just mentioned, it would be an injustice to not go see ‘Into Darkness.’ The high stake action and the special effects will keep you captivated throughout. I don’t blame them to not promote it as The Wrath of Khan 2013 version, but it loosely resembles that film and even that movie was a great film when it was originally released. If only other remakes can take the liberty to recreate an original, switch it up and still restore, with liberty, of course, the juiciness of the plot and storyline and still be as successful or even more so, than the original. If this were the case, I’d happily accept seeing more classic movies being redone.

The cast also features Zoe Saldana (Uhuru), Karl Urban (Dr. Bones McCoy), Simon Pegg (Scotty), Anton Yelchin (Chekov) and John Cho (Sulu) and many others. In these economic times, we try to spend our money wisely and if you want sheer entertainment, your money won’t be wasted ‘to boldly go where no man has gone before.’