Standing While Black? Teens Arrested in Rochester on Bus Stop 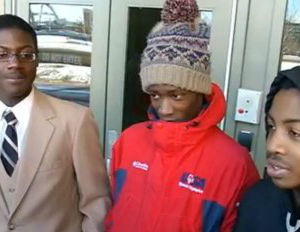 Three students in Rochester, NY were arrested the day before Thanksgiving for standing in front of a store.

Raliek Reed, Wan’Tauhjs Weathers, and Daequon Carelock were waiting for a bus to pick them up for a scrimmage game when police told them to leave. Although they tried to explain the circumstances when they refused arrest, police took in the students.

Their coach, Jacob Scott, arrived as the students were being arrested. He also tried to explain the situation but was threatened with arrest as well. According to the police report, the students were blockingÂ “pedestrian traffic while standing on a public sidewalk…preventing free passage of citizens walking by and attempting to enter and exit a store.”

Read the rest of this shocking story at NewsOne

Are You Financially Dependent On Your Spouse?

5 People You Need to Have in Your Entrepreneurial Network