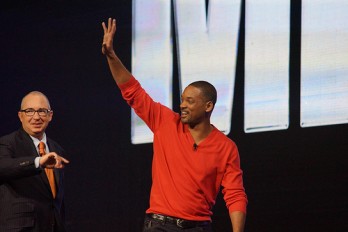 Sony made big moves this week at the 2012 International Consumer Electronics Show, and to assure that their announcements didn’t get lost in the shuffle, they recruited some big names, including Will Smith, Earth Wind and Fire, and Kelly Clarkson. Smith made a surprise appearance to help promote Men in Black 3, in 3D.

Topping the list at the Sony press conference was their deployment Sony Entertainment Network, a cloud based solution that provides consumers with a seamless, convenient user experience. New services like, Music Unlimited, Video Unlimited, Common ID and Digital Wallet will assist in this effort by enabling users to enjoy, share, watch, and listen to massive amounts of content on any Sony device including Sony Vaio laptops, tablets, smartphones and Play Station consoles. This device integration will make it easy to manage music and video libraries at work, at home, or on the go.

Sony also announced that they will allow PlayStation to be certified on non-Sony products.The foldable Tablet P, the next generation, tablet following the Sony Tablet S (released Sept 2011) was unveiled on Monday, along with a Blu-ray player powered by Google TV, and a crystal LED display, the industry’s first 55-inch Full HD self-emitting display using LEDs as the light source.

Watch below for video highlights from Black Enterprise’s visit to the Sony booth at CES. 2012.

UBR Spotlight: Karyn White’s Not A Superwoman, But A Super Entrepreneur

Swizz Beatz’ File-Sharing Site Gets His Celeb Friends In Trouble