Something For Everyone at the L.A. Auto Show 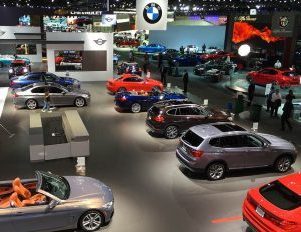 Auto shows aren’t just about design and horsepower anymore; they’re about technology and blurring the lines between work and play, when it comes to transportation. That was especially evident at this year’s L.A. Auto Show at the Los Angeles Convention Center, Nov. 18-27, 2016.

A strong theme at the L.A. Auto Show was that of automobility versus automobiles. Cars were not the only items showcased. Apps and engineering marvels that can move people from one place to another, and not necessarily via four tires and a steering wheel, were also featured. The Auto Show’s GO exhibit displayed vehicles ranging from scooters to mobility devices designed to assist people that have trouble walking long distances.

As much about ingenious mechanical and technological engineering as it was about new and improved automobiles, the L.A. Auto Show exhibited vehicles equipped with advanced virtual assistants and fully detachable devices that doubled as headrest TV screens and tablets. One could remove and take the tablets with them, upon exiting the vehicle. There were cars with sensitive, collision avoidance systems, self-parking cars, and–the current trend in cutting-edge automotive innovation–cars able to drive themselves.

However, if you attend car shows not as a car enthusiast, but as someone that simply likes big experiences, the L.A. Auto Show did not disappoint. There were test drives every day, all day long; contests and special offers; V.I.P. experiences; and public and private events that gave attendees curated swag bags.

There were also the dozens of shiny, new and improved, futuristic concept cars–some of which were not even fully designed as of yet, however, they all seemed to be in the process of preparing to blow the minds and stretch the imaginations of next year’s L.A. Auto Show attendees.

10 of the Most Intriguing African Americans in Science and Tech

Get Your Startup in These Funding Programs, Now!