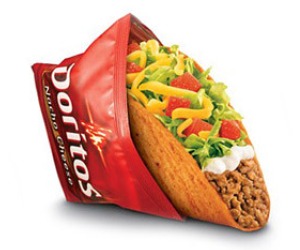 A year ago fast-food Mexican chain Taco Bell was facing sagging sales and a class-action lawsuit claiming it misrepresented the contents of its beef.

Fast forward to 2012, Taco Bell has had its most successful product ever, a taco with a Doritos-flavored shell, of which they’ve sold 200 million in 10 weeks, and helped lift profits for Taco Bell’s parent company by 23 percent.

Taco Bell chief marketing officer Brian Niccol says their success is less about the taco and more about letting the customer tell the story, in an interview with FastCompany.com

“We wouldn’t have sold 100 million Doritos Locos Tacos in ten weeks if all we did was say, it’s a new product and you’re going to love it because it’s now made with Doritos,â€ Niccol says.

Instead, the marketing team at Taco Bell searched social media for user experiences and reactions to the Doritos Locos Tacos.

“We found out this kid drove 900 miles to Ohio to get a hold of a Doritos Locos Taco during the market testing, and it became inspiration for the commercial,” said Niccol. “With the Doritos Locos Tacos we’ve proven to ourselves that if you can let go of some of the control, then good things can happen. Since the taco’s success, we’ve knocked down three conference rooms and created a new social-mobile listening room, where we’ve got the largest TV screens I’ve ever seen keeping track of what people are saying about our brand every day and everywhere.â€

Taco Bell’s Facebook page is further proof of their focus on social media. They have over 8.7 million likes, more than competitors Chick-fil-A (about 5.1 million Likes) and Buffalo Wild Wings (about 7.7million Likes). On average their social media accounts post highly engaging content once per day that is good-natured and witty and just under 90 characters. Their average social media engagement rate is .30%

Brian Niccol concluded his interview saying “once the idea is no longer just a Taco Bell idea and becomes the customer’s thing, it’s almost like they’re going to socialize for us. They own it. They get convicted about it. The next thing you know, they’re telling their friends they gotta go try it. So the second you can get it to move from, we’re telling you you should go try this, to consumers actually advocating for it, that’s when the brand moves into an experience that is worth you repeating.”