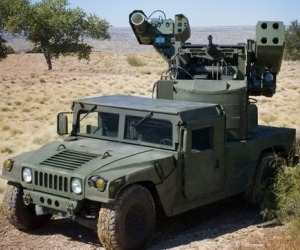 Small businesses within the defense industry are facing big problems. Many would be directly affected by the expiration of Bush-era income tax cuts because of the way they’re financially structured. If they’re organized as an S Corporation, income taxes would have to be paid at the same rate as an individual. If the tax cuts expire, the rates would shoot up. Add to this the $500 billion in defense cuts set to take place over the next decade on Jan. 2, unless Congress and the president come to an agreement.

“We have no choice but to reduce workforce size,â€ said Raj Narayanana, VP of business development for Carbon-Carbon Advanced Technologies in Kennedale, Texas. His firm crafts vehicle structures for rockets and hypersonic aircraft, and has about 45 employees.

Greg MacNeil, the CEO of GET Engineering in San Diego, also wonders what the future holds for his small business.

“Which is going to take place — both or one?â€ he asked.

“With a lot of the small businesses I talk with, and the uncertainty of the past few years, profits are just not large enough that it would affect us. Small businesses are fighting the sequestration battle for the opportunity to fight the Bush tax cuts’ expiration,â€ he added.

If all Bush-era tax cuts are allowed to expire, the already slim profit margins of small businesses would be further decimated. Robert Newton, the CEO of NCE, a small defense engineering and consulting firm in Tucson, Arizona, that employs 24, said the expiration would inhibit “new hiring, investment and advertisingâ€ — things small businesses regularly use their profits for. To further complicate the situation, small businesses in the defense sector are more vulnerable because of the lack of product diversification and a smaller voice in political advocacy than their larger competitors.

“When you look at the big contractors that are out there, they’re going to be less affected because it has big interest, big impacts,â€ Newton said. “Small businesses don’t have the big dollar programs that get all the political attention, they don’t’ have an army of lobbyists in D.C.â€

The defense industry’s small businesses are also unique because of their high-tech nature. Managers worry that if they lose talent because of financial hardships, they won’t be able to replace them easily.

“Unlike other businesses, you can’t just lay off people and get them back. Once they’re gone, they’re gone,” Narayanan said. “We have very high retention because this is very specialized. We could lose these high-tech capabilities if sequestration were to take effect.â€

“We’re in a very high-tech field. Most of the people who work for us are very talented folks; we will probably never get them back if we have to lay them off, they’ll go to the commercial side. So how do we keep our people in an uncertain time?â€ added MacNeil. “Give us something certain to look at, and we can budget for it.â€