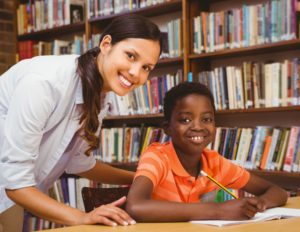 This isn’t the first time that Norwood headed up an educational services business that became highly recognized and revered. Norwood, who SVO calls a “social change agent, born entrepreneur, and a leader in creating greater educational equality,â€ also led Xcel Educational Services to win the award for Best Tutoring Company in Milpitas, California, four years in a row (2008—2012). He’s also the founder of CodeWritingKids.comÂ and serves as Milpitas Unified School District Board Trustee Vice President.

I met Norwood last year when he was a member of the judging panel for the second annual Black Enterprise BE Smart Hackathon. Impressed whenÂ I met him in Silicon Valley, I was eager to hear about his most recent award, and find out what his company has been doing to promote education equity.

Tutoring as a Bridge to Opportunity

“The award is an acknowledgment that there is a relationship between community-based organizations, for-profit organizations, city government, and our school districts, when it comes to education,â€ Norwood says. “Those willing to collaborate–not only in the short-term, but also the longer-term–that’s where great conversation happens and change occurs.â€

Norwood describes how his team developed Codewritingkids.com, a local initiative, as an example of such collaboration.

“This computer science initiative developed out of our observation that academic ability could be accelerated by improving digital literacy skills and introducing kids to computer technology. Mark Zuckerberg is right–computer science has the ability to transform how students learn math, English, and the traditional sciences through the use of machine technology.â€

However, Norwood says we can’t wait until our young people are in college.

“We’ve got to plant the seeds early and provide positive experiences. Computer science, computer technology, computer programming–these things should be options on the table [as] areas of interest for our young people, or else it won’t be part of their decision-making process.â€

Norwood has also exposed kids from Oakland and Compton to VR–otherwise known as virtual reality–and caused at least one student to change her major to computer science. This is not insignificant.

“We’ve been involved in a few hackathons. The numbers for African American computer science majors are dismal. There’s no existing pipeline of these students for companies to hire, but through hackathons and other community events, corporate sponsors and corporate volunteers see that there’s all this raw talent for them to invest in and cultivate.â€

Yet Norwood has no illusions about equity in education.”Some people think that education is a civil right; others believe it’s a privilege,â€ he says. “If you look at how some school systems or some communities are designed, it becomes apparent that the opportunity is not equitably distributed, and it’s not currently designed to be equitably distributed.â€

Norwood calls tutoring a bridge to opportunity, claiming, “Everybody needs tutoring. It helps students to answer the questions, ‘Do I really want to be successful? Am I willing to do whatever it takes to get there?’â€

For more information about the Bay Area Tutoring Association, visit its website.

5 Reasons to Vacation With the Family in Guadeloupe