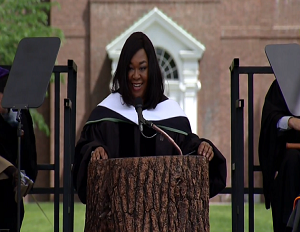 Sunday, Shonda Rhimes returned to her alma mater Dartmouth College to congratulate the 2014 class on their accomplishments and to offee some real advice on what life after college will be like.

Serving as the college’s commencement speaker, Rhimes quickly let the crowd know that she hated giving speeches and almost declined the offer. But in addition to being honest about her fear of public speaking, the television writer and producer gave three important life lessons to the graduates as they prepare to conquer the real world.

“Lesson one, ditch the dream and be a doer not a dreamer,” Rhimes tells the students. “Dreams are lovely. But they are just dreams, fleeting, ephemeral, pretty. But dreams do not come true just because you dream them. It’s hard work that makes things happen. It’s hard work that creates change.”

After discussing the importance of being a doer and not just a dreamer, Rhimes also discussed the need for us to go beyond just Twitter activism and to actually get out and do something that will help create change.

“A hashtag is not helping. #yesallwomen #takebackthenight #notallmen #bringbackourgirls #StopPretendingHashtagsAreTheSameAsDoingSomething … Hashtags are very pretty on Twitter. I love them. I will hashtag myself into next week. But a hashtag is not a movement,” Rhimes tells the crowd as she encourages the students to volunteer their time to helping a certain cause.

Ending her speech with knowledge about the price of give and take that the real world will require, Rhimes elaborates on how she balances, or at least attempts to balance, the many hats that she wears.

“Lesson number three, anyone who tells you they are doing it all perfectly is a liar,” she says.

“If I am succeeding at one, I am inevitably failing at the other. That is the trade-off. That is the Faustian bargain one makes with the devil that comes with being a powerful working woman who is also a powerful mother. You never feel 100 percent OK, you never get your sea legs, you are always a little nauseous. Something is always lost,â€ adds the mother of three.

From admitting to having a hangover on graduation day 23 years ago, to her fear of entering the real world once her Dartmouth days were over, watch Shonda’s full speech below as she keeps it real with the 2014 graduating class.