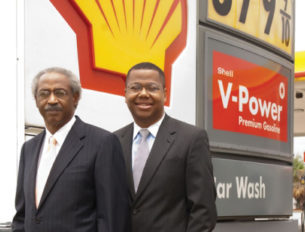 Sherman Lewis III says that he may be conservative by nature but he “bet the houseâ€ when he decided to launch his business venture in Houston 14 years ago.

While creating a portfolio of real estate properties in the Washington, D.C. metro area, Lewis, who was 33 at the time, found out about the possibility of owning Shell gas stations. “It was a total cost of $1 million. The majority of the cost was for inventory,â€ he says. “We didn’t really have a background in the business [so] we weren’t able to get any funding from the bank.â€

Lewis put up $690,000 by using his own savings and tapping into his home equity and convinced his parents to invest $310,000 of their retirement funds.Â  He quips: “Let me tell you, I had plenty of sleepless nights.â€

Lewis was able to lease 13 Shell sites in 2003 and due to their operational prowess–The Lewis Group was always in the top 10% of Shell sites in terms of performance–he gained the opportunity to lease another nine outlets for a total of 24.

“For the first three years, it was basically 24 hours a day, seven days a week for me,â€ he says. “I was just learning every part of the business.â€

When Shell decided to sell its real estate and get out the business, Lewis bought 10 of the sites in 2007. Eventually divesting one of the stores, he now operates nine outlets.

In 2008, Lewis discovered his next lucrative business opportunity right in his gas station. Says the intrepid entrepreneur: “We were actually leasing space in one of our gas stations to Jack in the Box. This was probably just a couple of years before they had started to sell some of their company-owned stores. It was a yearlong process of getting to know [one another]. They visited us and inspected all of our sites.â€

After building a relationship, Lewis formed a partnership with one of the company’s employees and retained a 75% ownership stake. He initially acquired 11 Jack in the Box outlets and started accumulating additional stores over the next eight years. Today, The Lewis Group owns a total of 39.

By taking risks in the franchising arena, Lewis grew his enterprise to become a leader among the BE 100s, ranked No. 30 on the BE INDUSTRIAL/SERVICE COMPANIES list with $116 million in revenues and almost 1,000 employees–the largest black-owned employer in Houston.