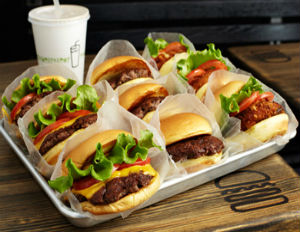 Shake Shack will begin trading on the New York Stock Exchange today. The company, which was started 14 years ago, is currently valued at an impressive $745 million. The business shared its financial data, which reflects a three-year fiscal period ending on Dec. 25, 2013, showing total revenue increasing from $19.5 million to $82.5 million. Creator and founder Danny Meyer can expect his own net worth to rise by an estimated $155 million.

Meyer opened a Chicago-style hot dog cart in the middle of New York City’s Madison Square Park. He hoped to attract the public to the park and give summer jobs to the staff at one of his nearby restaurants. What started out as just a street cart has boomed into a multimillion dollar company. As founder of the Union Square Hospitality Group, the entrepreneur owns more than a dozen renowned restaurants. Along with receiving the James Beard Foundation’s Restaurant of the Year Award, he was given the Humanitarian of the Year award.

The American fast-food industry is rapidly changing. Consumers seem willing to shell out more money for better quality food that’s made quickly. Shake Shack has become one of the top providers of fast-casual food, using fresh ingredients. The eatery operates 31 outlets in the United States and 32 internationally. Leslie Pfrang, a partner at the Class V Group, an I.P.O. advisory firm, shared her thoughts on the announcement, stating, “It’s also a name that people are going to recognize on Wall Street because it’s swept New York. Everybody goes to Shake Shack.â€ While there are seven outlets in New York, the company’s biggest growth market is in the Middle East. Shake Shack can look forward to a bright future as a global company.

Check out the menu here.