Secret Service: No, You Cannot Bring Your Guns to the GOP Convention 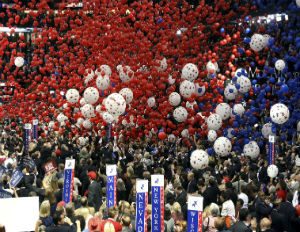 Citing the the dangers of “evil-doers, criminals,” and of course, ISIS, the petition quickly gained traction, garnering over 42,000 signatures.

GOP presidential candidate Donald Trump weighed in on Sunday, telling ABC that although he had not seen the petition, he was certainly interested.

However the Secret Service pulled the plug on any gun-toting plans with multiple statements released Monday afternoon. Kevin Dye, spokesperson for the U.S. Secret Service upheld the legality of the convention’s gun ban.

“Title 18 United States Code Sections 3056 and 1752, provides the Secret Service authority to preclude firearms from entering sites visited by our protectees, including those located in open-carry states,â€ Dye said.

“The Secret Service works closely with our local law enforcement partners in each state to ensure a safe environment for our protectees and the public. Individuals determined to be carrying firearms will not be allowed past a predetermined outer perimeter checkpoint, regardless of whether they possess a ticket to the event.”