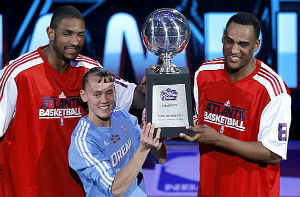 The N.B.A. on Monday announced a partnership that will make Sears the title sponsor of Shooting Stars, a shooting competition presented on State Farm All-Star Saturday Night. The contest is held on the same night as the 3-point shooting and slam dunk contests.

Haier, the maker of air conditioners, appliances and electronics, had been the title sponsor for the event since its inception in 2004. It joins an N.B.A., a current player and a player from the WNBA on one team. The team to hit the shots in the fewest time wins.

“We had six great seasons as a marketing partner with the NBA and it enabled us to considerably grow our brand awareness in the U.S.,” Haier spokesman James Liess wrote in an email to Black Enterprise. “As we evolve as a company, we decided that the next phase of our marketing efforts will focus more on the lifestyle experience of our products, specifically around our major appliances.”

Saturday night is one of the marquee events at All-Star weekend, and among the most popular events in sports. In addition to State Farm, the events boasts Sprite, Foot Locker, Taco Bell and BBVA among its title sponsors.

“NBA fans — like Sears customers — are loyal and passionate, so this is a great strategic fit,â€ said Jim Kunihiro, vice president, Chief Marketing Officer at Sears. “Bringing the excitement of NBA All-Star Weekend and these exclusive NBA rewards to our SHOP YOUR WAY REWARDS Members is another example of how we’ve created a program unlike any other social commerce experience.â€

“Sears is an iconic brand with a long-history of connecting with consumers and a great addition to NBA All-Star 2013,â€ said Rachel Jacobson, NBA Senior Vice President of Global Marketing Partnerships. “Sears Shooting Stars is one of our marquee events at NBA All-Star and through this relationship we will engage with fans through the event and the Sears SHOP YOUR WAY REWARDS program.â€

The All-Star game will take place on Sunday, Feb. 17 at the Toyota Center in Houston.

The Creepiest Financial Scams of 2012