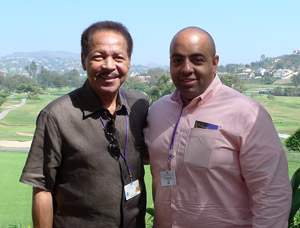 I learned of Don Barden’s passing this morning. And while I’d known about his illness for some time, I found myself surprised and saddened by the loss to the Black business community. Though soft-spoken and of average stature, Don seemed like a titan that would endure for many years to come and someone whom I’m proud to have counted among my friends.

I first met Don Barden in 2002 while in Detroit on assignment. I’d heard of the serial entrepreneur who went from being a music promoter to building a multimillion-dollar real estate portfolio and a cable business that ranked among the largest Black-owned businesses before entering the gaming industry. And I really wanted to meet the man. So I called his office a week or so prior to my trip to schedule a lunch meeting.

We met outside of one of his favorite establishments, Sweet Georgia Brown in downtown Detroit. Just prior to entering, Don stopped, bent over, and picked up a dime that was lying on the sidewalk. I couldn’t help but give a little laugh and hoped that I hadn’t offended him. After all, this is the man who sold his cable business for $350 million. He was wealthy, so why stoop to pick up a coin that far less affluent people (including myself) probably wouldn’t bother with? “I’m not too proud,â€ was what he said when I asked. At that moment, I knew I liked this man.

Over the years, I’ve had the honor of getting to know him better. I’ve dined with him at Fitzgeralds, the Las Vegas casino his company owns; attended his 60th birthday bash; and (in retrospect I’m ashamed to say) shared a few cigars and drams of scotch with him while talking business, politics, or whatever else came to mind. “Young manâ€ is what the blue-eyed CEO often called me.

Some four years back I conducted a one-on-one interview with Don onstage at our Entrepreneurs Conference. We discussed his life, successes, and failures (he never achieved his goal of operating a casino in his beloved Detroit) before a crowd of a few hundred people. During the Q&A portion of the session, one young fellow put Don on the spot, basically asking him why he didn’t provide money to African Americans looking to start businesses. Don’s response was direct: He made it clear that if the success of the business hinges on playing the black card for financing, it’s not going to succeed. While the public display of tough love ruffled the feathers of the asker, it was valid business advice.

The last time I saw Don in person was during our annual Golf & Tennis Challenge last Labor Day weekend. I’d sat down at an outdoors area of a restaurant overlooking the golf courses at the La Costa Resort & Spa in Carlsbad, California, when I spotted Don and invited him to sit with me. The conversation was pleasant. We discussed business, the recession, the state of his casinos, and, of course, Detroit. I noticed he was a little gaunt and looked tired–though I chalked that up to hard work and possibly a little jet lag. The other difference was that he spoke about his children and the future of his company after he’s gone.

At that time, he knew the seriousness of his cancer, but he was still upbeat. “I’ve got one hell of a fight ahead of me,â€ I recall him saying. “Take care of yourself and keep up the good work, young man,â€ was the last thing he said to me before heading off. The funny thing was he left me to pay the bill, but I didn’t mind. The conversation and company was well worth it. But just as I did eight years prior, I had to chuckle.