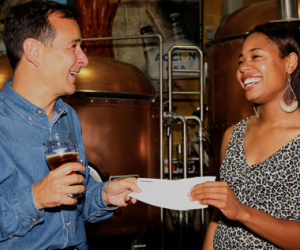 Samuel Adams, the Boston Beer Company, today announced a program that will provide loans to small businesses in the Washington, D.C. area, as well as a coaching event for the small business community.

The program, named Samuel Adams Brewing The American Dream, is a continuation of a regional program that recently expanded nationally. In select cities such as Washington, D.C., the program now offers funding to small business owners and high-impact one-on-one coaching.

According to the founder of Samuel Adams, Jim Koch, the purpose of the program is to work with the small businesses that create jobs within their local communities, but are seen as too risky for loans by traditional banks. Koch added that when he started Samuel Adams 28 years ago, he was routinely turned down by banks and knows the value of a relatively modest loan.

“There’s a very serious funding gap in our economy,â€ he said. “Even organizations whose mission is to support the small business community often don’t want to lend less than $50,000 because at that level, qualified applicants are difficult to come by.â€

Food, beverage, craft brewing and hospitality small business owners can apply for loans ranging from $500 to $25,000 to be used for a variety of purposes such as expansion, equipment and marketing with all loan payments recycled back into a fund so they can be re-purposed into new loans.

Koch added that there were many aspects to running a small business that he wasn’t aware of when he began his company in 1984, with a generations-old family recipe uncovered in his father’s attic.

“I didn’t know many of the practical things that often cause small businesses to fail if they aren’t done right. That’s why a large part of Brewing the American Dream is focused on offering in-depth expertise and advice versus just slipping a check under the door.â€

“We’re looking forward to working with our partner, the LEDC, to support food and beverage related businesses in D.C.,â€ commented Gina Harman, CEO of Accion U.S. network, a non-profit micro-lender and program partner. “Our work with the Samuel Adams Brewing the American Dream program continues to grow and expand, and we’re all very excited about providing this dynamic market with much needed financing along with real-world educational resources and coaching that’s so critical to small businesses’ success.â€