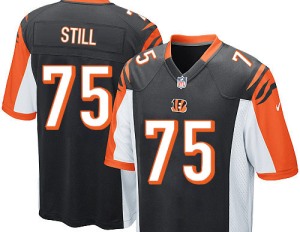 According to CBS Sports, New Orleans Saints coach, Sean Payton purchased 100 Devon Still Cincinnati Bengals Jerseys because the proceeds of the sale will go towards pediatric cancer care and research.

Devon Still, the 25-year-old defensive lineman, was cut by the Bengals when the team trimmed its roster down from 75 to 53 players. The team decided to sign him to the practice squad so he could have health insurance to help care for his 4 year old daughter, Leah, who is currently battling Stage 4 pediatric cancer.

Payton, after hearing about the story while driving home earlier this week, decided to help by purchasing 100 jerseys. On Tuesday, the Bengals sold more Still jerseys than they had sold of any other player in franchise history.

And there’s more good news to this story. On Wednesday, the Bengals added Still to their active roster.

‘They could have just washed their hands completely of it,’ Still said. ‘Say we don’t care what’s going on in his personal life, we just want people who can care 100 percent on football, that’s what they pay us to do. But they thought about my personal issues and allowed me to come back on the practice squad so I still have insurance. They said if I keep working on my physical with my injury and mentally prepared myself to focus on football, then they can move me back up to the roster, so I am not all the way out of the loop.’

Timeshare Red Flags: Six Things to Look Out for Before You Sign