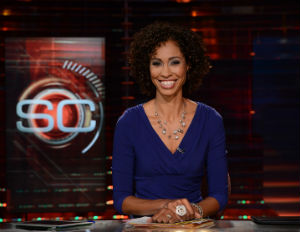 ESPN’s NBA Countdown is getting a host, and it’s Sage Steele.

As part of a new multi-year contract extension with the versatile on-air talent, Steele will host the Friday and Sunday editions of the network’s NBA Countdown, alongside Jalen Rose, Bill Simmons and former NBA coach Doug Collins. She will also host the Wednesday Countdown show, which will feature Rose, veteran analyst Doris Burke and Avery Johnson.

“I’m thrilled to continue my career at ESPN and to embark on this exciting, new challenge,â€ Steele said in a statement. “I love the NBA, and like millions of other fans, I’m looking forward to the season tipoff and to guiding some great discussion from our expert analysts.â€

The move comes as ESPN sought to tweak the show’s lineup after an up-and-down first year. No longer part of the show is Michael Wilbon, who served as its de facto host. Magic Johnson announced last week that he’d no longer be a part of the show due to demands in his schedule. That left behind Simmons and Rose, who’ve both shined on the former’s site, Grantland, in a series of smart, interesting and often humorous NBA season preview videos.

Critics of last year’s show decried its lack of a host, saying the show was often without focus and couldn’t accentuate the singular talents of Rose, Simmons and Magic Johnson. It could certainly get that from Steele, who joined ESPN in 2007 as the host of the afternoon SportsCenter and began her career at WSBT-TV in South Bend, Ind.

“Sage is a dynamic, engaging personality and an avid follower of the NBA,â€ said John Wildhack, ESPN’s executive vice president of production. “She has a proven track record hosting our NBA coverage, and, on Countdown, she’ll help facilitate insightful discussion amongst her new teammates Doug Collins, Jalen Rose and Bill Simmons.â€

ESPN says Steele will continue to appear on SportsCenter. Perhaps well-known among media circles is Steele’s relationship with Jalen Rose. It became a hot topic during the 2012 NBA Finals when the pair had not received a cue from Bristol to begin their spot. Instead, they were carrying on casual conversation over a hot mic that included dinner plans at Miami hotspot Prime 112.

Both parties took to Twitter and exposed the absurdity of the idea that they’d act inappropriately on location in front of a camera crew. Rose gave the people what they wanted: an explanation. He later said they went back to his days as a player for the Indiana Pacers when Steele was a reporter for WISH-TV in Indianapolis.

One Year after Superstorm Sandy, Many Small Businesses Aren’t Prepared for the Next Disaster