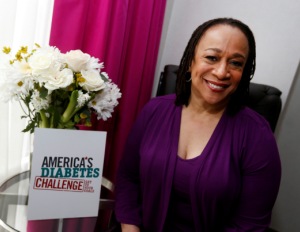 The Law and Order franchise wouldn’t be the same without Anita Van Buren. The face is so familiar, she’s lasted longer than every other main character on the series — that staying power has to be acknowledged. But her staying power in her personal life is even more important, especially knowing that S. Epatha Merkerson, the actor playing Van Buren, is diabetic. After learning 11 years ago that she had the disease, she spent time learning about diabetes. She wants you to be just as aware.

She has teamed up with the drug company Merck to encourage others to be more aware of their A1C levels and to avoid the problems that can accompany the condition. Merkerson took time to talk to BlackEnterprise.com about the program, America’s Diabetes Challenge, and why she is stressing the importance of people knowing their A1C levels.

BlackEnterprise.com: What made you decide to get involved with Merck’s diabetes campaign?

S. Epatha Merkerson: I teamed up with Merck on America’s Diabetes Challenge because I am passionate about encouraging people who have Type 2 diabetes, who are going through the same thing as me, including the 4.9 million African American adults living with Type 2 diabetes, to know the importance of their A1C and to talk to their doctor about setting and attaining their own A1C goal. A1C is an estimate of average blood sugar over the past two to three months, and it is recommended that many people with diabetes have an A1C of less than 7% to help reduce the risk of complications. Nearly half the people with diabetes are not at an A1C that is less than 7%.

Could you explain the America’s Diabetes Challenge: Get to Your Goals program?

America’s Diabetes Challenge: Get to Your Goals is a program from Merck to urge people who have Type 2 diabetes to know their A1C number and to talk to their doctor about setting and attaining their own blood sugar goals. The program encourages friends and caregivers to challenge their loved ones to get to their A1C goal and to help support the 29 million Americans living with this condition. Type 2 diabetes is also a significant health concern in the African American community. Nearly 20% of the adult African American population has diabetes, and I will be traveling next to Atlanta in October for an event aimed at helping the African American community there to understand their risk of developing Type 2 diabetes and how they can better manage the disease.