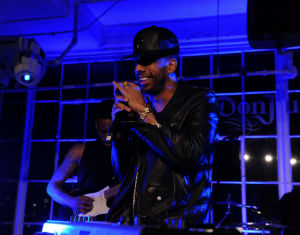 Ryan Leslie, sitting in the courtyard of a warehouse in the west side of Manhattan one recent evening, is as relaxed as he could be. It’s a seasonably warm night, and he’s got dark glasses on, which shield his eyes from the studio light shining on the several bottles of Don Julio, and a margarita someone brought over to him. It was just 45 minutes before he was slated to perform songs for an audience from his new album, Black Mozart. It went untouched.

For his most loyal fans, this Ryan — laughing, smiling, reflective — is a most welcome sight. He claimed that his laptop was stolen, and wound up offering a $1 million reward for its return. A mechanic returned the laptop, but Leslie said that he couldn’t retrieve the intellectual property he’d recorded, property that was was contingent on issuance of the reward. Of course, a Manhattan federal court thought differently.

Fresh off his tour, we talked to Ryan about the controversy, his new project and how his transition to becoming an independent artist has affected his business.

BlackEnterprise.com: Welcome back. How was the tour?

The tour’s been phenomenal. July 25th we’re playing New York City, it’s the official Black Mozart tour and concert, but we’ll do a world premiere of Black Mozart the film, which was shot in Vienna.

We were in the U.K. in February and then right after that we did domestic dates. So we did the west coast all the way to the east. It’s about word of mouth, fans and people really appreciating and enjoying the live show. It’s just amazing to vibe and rock out with the people who put me in the position that I’m in today.

Was at least part of this tour cathartic because of all that you went through in 2012?

I take all that in stride. That was inspirational on so many different levels. So yeah, it’s great. Music is a release and a catharsis and being on stage with the energy that you share with your audience is great. We definitely turn up and that’s one of the greatest feelings in the world. That’s why I can understand why Mick Jagger is still doing it. I thought last time was going to be the last Rolling Stones tour, and I found myself revving up to spend another $1,500 to go and see him again. So that’s the goal, that’s the vision … to go out and play as much as I can while I have health and strength and the energy is there.

When you think of Mozart, you think of composition, and I think when people think of your work they think of the same elements. How’d you approach that concept, and what’s the feedback you heard so far on what some have called a controversial title?

I think that in order to be incredible, you have to set the bar high. And I think that even by choosing the name of the album, it really just set an insanely high standard. I’ve heard the feedback online and I’ve heard the feedback from a few folks raising their eyebrows, saying it’s sacrilegious or whatever. For me, I understand in order to be the best, you have to be better than the best. That’s a tall order, but I also believe that we’re in the business of entertainment, so if the title of the record can be thought-provoking and incite conversation — or polarize people so they’ll discuss the value of Mozart’s genius and legendary contribution that may have been overlooked in modern times, that’s also a contribution in and of itself.

So I stand by the title, and I think people will see that when they listen to the music and see the film that the [project] is progressive. Kanye [West] came to the screening in Paris. And we’re going to do a world-premiere for New York on July 25 and I’m really excited it.

You’ve always been known as someone who used their artistic license to stretch the limits of the music and the culture, and even talking to you I get the sense you’ve taken that into overdrive. Right or wrong?

Man, I’ve just never been afraid to be me. I remember when I was trying to raise money to go to Harvard. My parents didn’t have the money so they put me on the speaking circuit. I was speaking at rotary clubs up and down the west coast. I remember telling my father when we did our hometown rotary international dinner, I said, ‘Dad, I’m going to do my speech and everything, but then I want you to put up a keyboard on the other side of the room.’ I had a group that I was working with in school, and I wanted to be able to rap for these people as well. And he said, ‘Are you serious?’ I’d already won the speech competition and got the money from rotary.

I just wanted to show everybody even in my oversize suit — I borrowed it from a friend of mine on the football team, so you can imagine how I was swimming in that ocean of fabric — that I could do my raps. There’s an interesting dichotomy that lives in me, to go from academia all the way down to what some may say is talking ratchet on this album. But at the end of the day I want to be expressive and honest and represent the experiences, places and people that inspire me.

What’s your approach to business — how’s it changed since you got in the game?

My business is totally different now because I’m independent. I came in the game with a publishing deal, with a record deal. It’s all changed now. I have a direct-to-consumer business model that is second to none. All the time I spent on a record label, I never saw a record royalty, now I’m seeing $12 a record from record one. I’m creating a different model for my audience to be able to communicate with me. People who have ever spent money with me on a CD, a hat, a sweatshirt, a concert ticket can actually call and email me directly. They have a direct line of communication. I want to be Apple or Amazon. So that means I have to have a client record that let’s me know how my audience is supporting me. We’re getting all the way down to the granular analysis of the consumer.

It means I know the person in London who bought four meet-and-greets for four of her people to come and see me at Electric Brixton in London. I know her by name and email address because she wants to have that dialogue with me. That doesn’t happen when I sell 50,000 records on iTunes. All of that information goes to them. Sure, I get a check, but when I want to reach those people again I’ve got to spend money. Now, if I need to promote, I can spend that money on reaching new people.

In all the muck and back and forth of the past few years, who was it that reached out to you that, perhaps 10 years from now, you’ll look back and say, ‘You know what, that person really reached out to me and I didn’t really expect it.’

You know what? Really, that whole situation was just a reminder of the importance and value of family. There were people who went with me through the entire process — and we’re still going through the process. Just my mother and father, though. When I was on the cover of the New York Post, all of the things I’ve ever done in life, whether it was graduating from Harvard or being nominated for a Grammy … I probably could have written a check to a philanthropic organization for $1 million and not ended up on the cover of the New York Post. But I remember calling my mother and said, ‘Mom, I went to the deli this morning, and I was just getting my orange juice and I saw this cover.’ Even the guy behind the counter was like, ‘Yo, that’s you!’ My mom says, ‘Well, at least it’s a nice picture.’ You know?

Like, that’s how you know no matter what you’re going through the people that really love you are going to be able to help you take everything in stride because tomorrow’s a new day. That’s why I’m excited for tonight. And for the future.