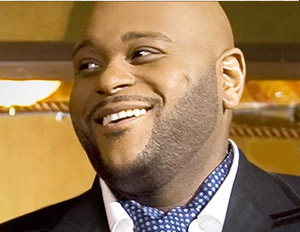 Ruben Studdard insists that he doesn’t directly try to shy away from his past, but the R&B/gospel vocalist has been through a lot of changes since he captured the public’s heart as the winner of American Idol‘s second season in 2004. Since then, the 33-year-old has been on several national and international tours, and has earned Grammy nominations for his own solo material and for an album from his Broadway tour. Despite Studdard’s public accomplishments, most may have a hard time recognizing him. Not because he’s been out of the spotlight for a bit, but because since becoming a vegetarian and enlisting a personal trainer three years ago to shed 70 pounds, the once-heavyset singer looks and feels like a new man.

Now, Studdard is on a mission to help others in his community adopt a healthier lifestyle. This weekend (November 18-20), he’ll be hosting the Ruben Studdard Celebration Weekend, a music and fitness festival, in his hometown of Birmingham, Alabama. The event will also include a series of marquee running events–a half marathon, a 5K run and the “Linn Park Lap,â€ a short fun run/walk for all ages–that Studdard himself will participate in. BlackEnterprise.com spoke with the singer about the event, his inspiration for getting healthy, the influx of music-based reality TV shows, and working with Heavy D on Studdard’s upcoming album, tentatively titled Letters From Birmingham.

How did the idea for the Ruben Studdard Celebration Weekend come about?

It came about when I was on the Clay [Aiken] tour. I was working with a trainer so I could have my stamina on stage and he knew this guy who puts together big events for health and fitness, and he said, “It’d be cool if you put together something like this for your foundation.â€ We talked about it and solidified something, and it finally came up.

What are the specifics of the weekend?

We’re having a huge casino night [tonight] to benefit the Ruben Studdard Foundation for the Advancement of Children in the Music Arts. Saturday, we’re having registration for the race. Sunday, we’re having the fitness festival with a 5K fun run and the half marathon for the serious runners. It’s just going to be a great event. We’re having a big concert after the race, so it’s going to be fun… The whole thing is centered around music and having a great time with the community at large. We’re doing something that most people in Alabama wouldn’t be doing; it’s something out of the norm.

We have a lot of great races here, but we try to target people that normally don’t get out and run and bring them out for a fun event. It’s not only a run, but it’s an event that directly benefits the children in the music departments here in Birmingham and in the state of Alabama. We get back with sheet music at music camps and all those things, so we’re looking forward to giving people the opportunity to help us help the kids.

In addition to your training you became a vegetarian, when did that lifestyle change start?

I became a vegetarian about three years ago. It was different, but I just wanted to do something completely different. I wanted to eat differently, and it’s really worked for me, brother.

How much weight have you lost in the process?

During the process of a couple of years, I’ve lost about 70 pounds by becoming a vegetarian, eating healthier, working out and running. It’s an ongoing thing. It’ll never be something I have to stop doing. I’m a larger guy, so I have to always make sure I stay on top of that.

How I Did It: Chef Uses Food to Bridge Cultural Gap