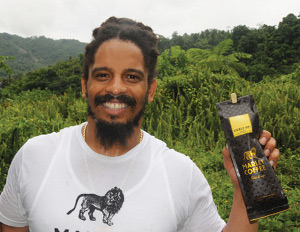 “The response to our Real Cups has been overwhelming both from a consumer review and distributor satisfaction,â€ he says. “My objective has always been to move Jamaican Blue Mountain from being a niche item within the coffee industry to something that can be enjoyed ubiquitously by all people. We thought it would take time for this to happen, but distribution has exceeded my expectations.”

Distribution of the coffee initially started in Canada and then quickly spread to the United States. Today, the company announced a deal with QVC to promote the coffee to over 3.5 million weekly viewers.

“I’m looking forward to appearing on QVC to convey our message of coffee farming and explain what makes Jamaican Blue Mountain Coffee so unique,” Marley stated. “The viewers of In The Kitchen With David have shown that they appreciate quality foods and beverages, and I know that they will love our world-class Marley Coffees.”

Marley Coffee CEO Brent Toevs relishes the opportunity to appear on QVC as it “has been instrumental in the success of many products.â€ He adds “we hope that our relationship with the network continues and that we have many more appearances throughout the year.”

Salty Spouse: 3 Signs Your Mate is a Career Hater