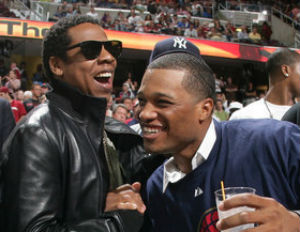 Look at how happy they are! It was supposed to be a test of epic proportions for Roc Nation Sports: landing a multi-year, $300 million deal for Robinson Cano, the Yankees second baseman and best all-around player. But as Cano only recently officially became a free agent, questions in the baseball world linger around Jay Z’s actual role in the negotiations.

“Ask folks around the baseball universe exactly what Jay Z’s role will be in the process, and you get a similar answer: Something to the effect of “Beats me,â€ writes New York Post baseball columnist Ken Davidoff. “But it would be surprising if Jay Z were not integrally involved – meeting in person with club officials, if not necessarily working the lobby here at the JW Marriott Grande Lakes – in landing Cano his megadeal.”

From the Yankees, Team Robbie sought a 10-year, $310-million contract. But the Yankees, who are also in the market for starting pitching, came back with seven years and a reported $168 million. Davidoff says that the negotiations between the Yankees and Cano’s team weren’t exactly lengthy. Part of the reason even Yankees officials aren’t certain of Jay Z’s role,” Davidoff writes, “is that their discussions didn’t last very long.”

Representing Cano — and in conjunction with Roc Nation Sports — at the winter meetings at JW Marriott Grande Lakes is CAA’s Brodie Van Wagenen. A former Stanford baseball player, Van Wagenen, 39, is one the co-heads of CAA’s baseball division, which has negotiated contracts for some of the biggest names in baseball, including Buster Posey, Ryan Braun, Adam Jones and Mark Buehrle.

Jay Z himself was said to be far more instrumental in marketing and endorsement deals, such as the one he helped land for Cano with Pepsi back in July.

“This deal reflects how powerful Robinson’s brand is,” said Roc Nation Sports spokesman Ron Berkowitz in a statement at the time.

And despite questions about what Jay Z’s role is, Robbie’s next baseball contract will reflect how powerful the Roc Nation brand is, too.

6 Things to do Before Starting Your Own Business