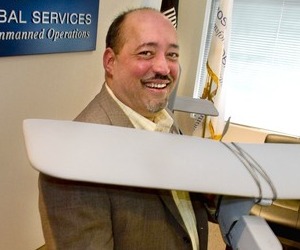 BOSH Global Services is a veteran-owned company that offers operational support services. Under Fitzgerald’s leadership, BOSH has grown to employ over 130 people in 20 locations, both domestic and international. Some of the criteria BOSH was evaluated on were innovation in the face of adversity, their engagement with the community, their charitable involvement, revenue and level of employee growth.

“This is not about me,â€ Fitzgerald said. “Our high caliber employees, teamed with the incredible level of support we’ve received from the SBA, formed an extremely effective partnership. The SBA’s 8(a) program gave us the level playing field we needed to demonstrate our capabilities to our prospective customers, and our employees did the rest.”

The award was presented during a presentation at the BOSH corporate headquarters in Newport News on Wednesday, November 7th, by Natalia Olson, SBA Regional Administrator for the Mid-Atlantic Region. Olson has experience founding a small company and reflected on this while presenting.

“I was a minority small business, and it’s really tough to get a company going,” said Olson. “You have a lot of obstacles…but if you persevere, and keep the dream alive, I think that’s admirable.”

“This is a very special award,â€ said Jayne Armstrong, District Director for the SBA’s Richmond District. “Being recognized as Virginia’s Minority Small Business Person…speaks volumes about the contributions [BOSH] is making, not only to the Virginia economy, but…to the military and the safety of the United States.â€

10 U.S. Cities Your Smartphone Is Most Likely to Get Jacked In