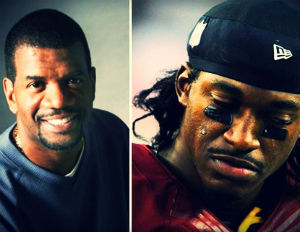 During a discussion on Thursday’s show about Griffin, Parker, who is black, asked the question: “Is he a brother, or is he a ‘cornball’ brother?â€

Parker questioned Griffin’s “blackness” because he said Griffin “may be a Republican and he’s engaged to a white woman.”

Parker reportedly said: “He’s not real. OK, he’s black, he kind of does the thing, but he’s not really down with the cause. He’s not one of us. He’s kind of black, but he’s not really, like, the guy you want to hang out with because he’s off to something else. We all know he has a white fiancÃ©e. There was all this talk about how he’s a Republican … evenÂ Tiger Woods isÂ like, ‘I’ve got black skin but don’t call me black.’ ”

Read more and a full transcript at the Root.

Would you Move your Startup to St. Louis for 50k?

Django Unchained’s Jamie Foxx: “My Life is Built Around Race”