Rihanna Shows Skin for GQ 'Men of the Year' Issue 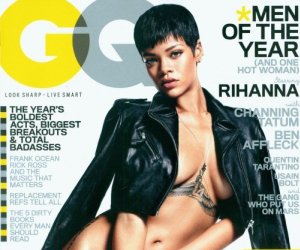 For their popular Men of the Year issue, GQ Magazine has international superstar, Rihanna, on the cover in a provocative pose that shows some skin.

You can see some of her tattoos including her much talked about under her breasts one. Just like her new album title, she is ‘Unapologetic.’

This cover issue makes GQ history as Rihanna is the only woman thus far to ever grace the publication’s annual “Men of the Year” issue. In the issue, she speaks about her sexuality, among other things. She states, “I have to be in control in every other aspect of my life, so I feel like in a relationship, I want to be able to take a step back and have somebody else take the lead.”

She is set to go on a short tour starting tomorrow in Mexico City.

Nick Cannon is ‘Wild â€˜N Out’ Again on MTV2