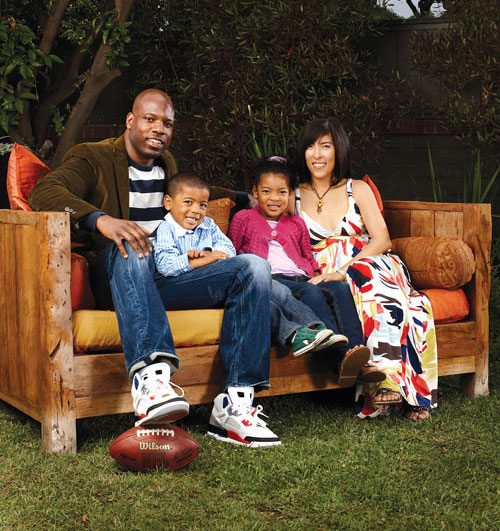 Malcolm Johnson has had a good handle on his money since retiring seven years ago from professional football. The former wide receiver’s NFL career spanned three years with the New York Jets, Cincinnati Bengals, and Pittsburgh Steelers, and one year with the Ottawa Renegades of the Canadian Football League. Johnson, 32, wasn’t a top earner, but he made about $250,000 per season to play the game he loved. Upon leaving professional sports, Johnson’s severance was a lump sum of $30,000.

Johnson made some key financial moves to help himself and his family transition to life beyond football. Even at the height of his pro career, he made the most of every dollar he earned, spent money conservatively, and followed the rule of “pay yourself first,â€ a lesson he learned from his parents.

Today, Johnson and his wife of nine years, Joanne, have a favorable balance sheet. The Los Angeles couple has positive net worth taking into account their cash savings, investments, and more than a million dollars valued in real estate. However, they still have a sizeable amount of debt–about $1 million, the bulk of which includes two mortgages. The first is a mortgage balance of $450,825 for a 30-year jumbo fixed-rate loan at 6.25% on their current 1,100-square-foot home with three bedrooms, one bath, and separate guest house. They purchased the home for $765,000 in 2006. The second mortgage has a balance of $436,000. They took on a 30-year fixed rate loan at 4.88% earlier this year to finance the purchase of a 3,000-square-foot house, with five bedrooms and four baths. The Johnsons bought their new home, which was in probate, for $545,000. Renovations to the home, which are under way, are estimated at $62,400. The couple set aside the full amount from cash savings for the repairs.

“We had been looking for a bigger house to accommodate our family [which includes their children, 4-year-old Luke and 6-year-old Kaya] and the likelihood that my mother-in-law will be moving in with us in the next three to five years,â€ says Malcolm. “The downturn in the real estate market presented a great buying opportunity in Lafayette Square, a gated, family-friendly neighborhood in the heart of Los Angeles.â€

The college sweethearts, who attended the University of Notre Dame as undergraduates, have advanced degrees and outstanding education loans. Malcolm earned an M.B.A. from Carnegie Mellon University in 2006. He owes $31,270 on his student loan. Joanne, 33, holds a law degree from the University of Southern California, which she obtained in 2001.

Malcolm’s gross pay is $153,000 as vice president of the commercial real estate finance group at a multinational bank. Joanne recently bid farewell to her position as in-house counsel for an energy drink company. Joanne says she hopes to find a job “that is a good long-term fit, more personally fulfilling, and offers work—life balance.â€ Before Joanne left her job in January, the couple’s combined household income exceeded $250,000 a year. Living on just Malcolm’s salary, their monthly net is around $8,925. With bills and loan payments adding up to $12,936 a month, the Johnsons now have a $4,011 financial shortfall. They’re dealing with the shortfall by using their savings.

Luke and Kaya’s line item on the monthly budget adds up to about $1,500. This includes Luke’s $950-a-month pre-school bill, as well as various activities, such as gymnastics, basketball, and after-school theatrical plays.

Washington Report: Updates From the Capitol