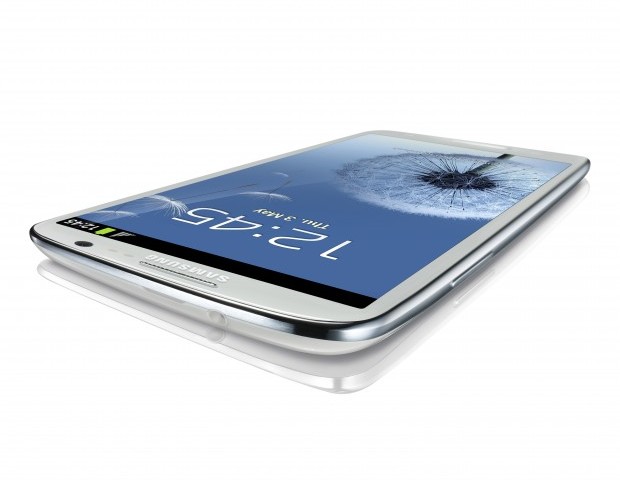 As smart phone manufacturers go, the men and women at Samsung must be geniuses because the Galaxy S series keeps getting better and better. The Galaxy S3 has so many great features it's hard to say where to start. There's the 4.8-inch HD Super AMOLED touchscreen display, and the multitask feature that lets you continue to watch a video while texting, but the S Beam has got to be the best feature in my book. It allows you to place two S3's back-to-back and you can transfer pictures, music, videos and more.

Is bigger better? Samsung hopes the smartphone-buying public thinks so. This year it goes into the holiday shopping season with not one, but two big-screened Apple iPhone challengers: The big Galaxy S III, which recently surpassed the iPhone 4S for the worldwide lead in smartphone sales, and the even bigger Galaxy Note II.

Samsung’s two flagship smartphones share many features, including the ability to transfer photos and other data with compatible mobile devices by tapping them together, and the Android operating system, which is now more popular worldwide that Apple’s iOS software for its iPhones.

The Galaxy S III and Galaxy Note II support near-field communication (NFC), which allows compatible devices to communicate with each other by bringing them close together, and S Beam, which lets devices transfer data over a direct Wi-Fi connection. The combination of these features lets users share photos and videos from phone to phone by tapping them together–a capability touted in Samsung’s TV ads, which point out that the iPhone 5 lacks NFC capability.

Both Samsung Galaxy units have impressive cameras: An 8-megapixel camera with LED flash on the rear and a 1.9-megapixel camera on the front. They also support a Smart Stay feature, which recognizes your face and adjusts the screen to how you use the phone. For example, the phones can keep screen brightness turned up if you’re reading an e-book and they detect that your eyes are looking at the screen.

Aside from its large display, the Galaxy Note II’s most intriguing features are its muscle-bound, quad-core, 1.6GHz processor and its S Pen stylus, which stores neatly in a hole near the bottom. Using the S Pen stylus, the Galaxy Note II’s screen can detect different levels of pen pressure, which means you can change the thickness of electronic “inkâ€ based on how hard you press down with the stylus. Holding a small button on the S Pen as you tap the screen gives you an instant screen shot of whatever you’re looking at.

At 5.9 inches tall by 3.2 inches wide and 0.37 inches thin, the Galaxy Note II is slightly slimmer than the original Galaxy Note, which has a 5.3-inch display and a boxier 5.8-by-3.3 footprint. The huge case allows for the use of a massive, 3,100-milliampere battery, which is needed to power the fast processor, which in practice processed full-screen HD video with aplomb, and to support the large, bright display.

The Galaxy Note ships with version 4.1 (Jellybean) of the Android operating system while the Galaxy S III came with version 4.0 (Ice Cream Sandwich), but is upgradeable to version 4.1. Since both units are quite a handful, you may want to practice with one at a store to make sure it’s finger-friendly enough for you.

Who Would be a Welcomed Addition to OutKast?

Looking for a New Thang: Top 7 Gigs for Career Changers