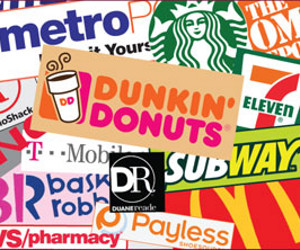 Where Starbucks used to be the ubiquitous brand on every corner, in the last few years Dunkin’ Donuts has taken over almost every corner in New York City. With a total of 484 stores, the franchise is on its way to becoming the first national retailer with 500 stores in the city.

In the fifth annual study from the Center for an Urban Future, Dunkin’ Donuts tops the list as the largest national retailer. This is the fifth straight year there has been an increase in the number of national chain stores in the five boroughs.

The study finds that the number of chain stores in the city is up by 2.4 percent from last year. Subway is right behind Dunkin’ Donuts and the sandwich shop looks to be on pace to surpass Dunkin’ Donuts for dominance in New York. While Dunkin’ Donuts gained 18 stores over the past year, its lead over Subway shrunk due to Subway adding 24 stores.Â  Subway added 24 stores this year, bringing its total to 454. In 2010, Dunkin’ Donuts had 77 more stores than Subway, but this year the difference between the total number of storefronts each chain had was down to 30.

Starbucks, remained the third largest retailer in New York City, retaking their position from MetroPCS which had the number three spot last year. While MetroPCS storefronts are prevalent in the outer boroughs, out of 272 locations, 200 Starbucks are located in Manhattan.

Source:Â Center for an Urban Future