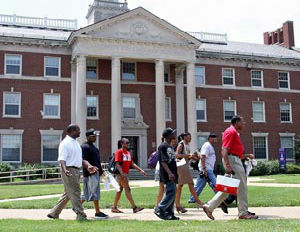 A report released by the Association of Public and Land Grant Universities (APLU) reveals several states that are home to Historically Black Colleges and Universities (HBCU) have withheld nearly $57 million in funding that was designated for the institutions.

Between 2010 and 2012, Texas, North Carolina, South Carolina, West Virginia, Virginia, Arkansas, Kentucky, Missouri, Florida and Delaware reportedly did not allocate proper funds to some of the minority institutions within their state.Â  Under the Morrill Act of 1890, which established 18 black land-grant universities, the federal government committed to providing financial support to these institutions as long as the state matched that support. While the United States Department of Agriculture continues to provide federal funding to land grant institutions, APLU’s report finds disparities in states matching funds for land grant HBCUs versus predominantly white colleges and universities. When it came to HBCUs, the institutions received more than $244 million from USDA, while states matched just over $188 million. Under congressional mandate, states are not penalized if they cannot or refuse to fund the schools, leaving HBCUs with the responsibility to match the funds up to 50 percent in order to keep the federal allocation. However since 2008, more than 50 percent of HBCU Land Grant schools have applied to be waived of this requirement.

[Related: Mobile App Entrepreneur on How to Move from Idea to Execution]

“When the state does not match the funds, the university is on the hook to provide the money back to the USDA,” HBCU Digest reports Dr. John M. Lee Jr., Vice President for the APLU Office ofÂ Access and Success saying. “There’s no mechanism now to make states accountable if they don’t match the funds. In fact, it presents a big problem for those HBCUs that want to pursue other USDA grants. If their state legislatures aren’t matching annual funding, and a particular grant requires matching dollars from state governments, some Black colleges may be hesitant to go for that kind of grant.”

To help solve this issue, APLU recommends state legislatures ensure that proper and fair funding is dispersed to HBCUs and predominantly white schools and that the federal government cracks down on the one-to-one matching by states.

One-Way Trip To Mars: Mars One To Establish A Permanent Human Settlement