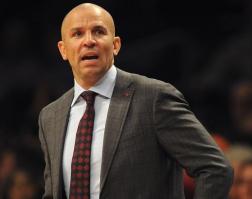 What's fifty grand to Jason Kidd? Nothing to sneeze at.

Brooklyn Nets coach Jason Kidd was fined $50,000 by the NBA on Thursday for intentionally spilling a cup of soda to delay the game in an eventual 99-94 loss at home to the Los Angeles Lakers. The news was first reported by Yahoo! Sports Adrian Wojnarowski.

Kidd denied that he spilled the drink intentionally. But replays show Kidd mouthed the words “Hit me” to Tyshawn Taylor, the Nets guard. Taylor bumped him, and the drink tumbled to the floor.

Brooklyn’s coaches were given an opportunity to draw up the last offensive play of the game. Paul Pierce clanged a jumper that would have tied the game off the right side of the rim.

“Cup slipped out of my hand while I was getting Ty,” Kidd said. “Sweaty palms.”

“I was never good with the ball,” said Kidd, a former point guard and number two all time assists leader. “In the heat of the battle, you’re trying to get guys in and out of the game and the cup fell out of my hand.”

The reeling Nets carry a 4-11 record into their Friday contest against the Houston Rockets.

Who Should Manage a Company’s Social Media Presence?