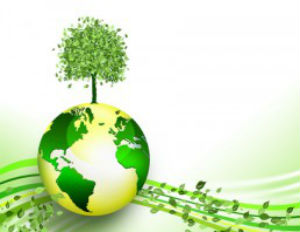 Earth Day’s 45th anniversary will be marked on Wed., April 22, but some facts on what’s filling landfills might leave you down in the dumps.

According to a new study released the United Nations University, nearly 42 million metric tons of electronic waste–or e-waste–was thrown into the trash and not recycled in 2014. What’s more, a third of that global e-waste figure came from just two countries: China and the United States.

The overall figure is also expected to rise 21% and reach 50 million metric tons in 2018.

The report, CBS notes, also dispels a myth that landfills are filling up with electronic gadgetry because of rapidly changing fads, and innovations in the areas of computers and smartphones. Those devices only comprised a 7% chunk of trashed electronics. The biggest offenders were small equipment, such as vacuum cleaners, microwaves, toasters, electric razors and video cameras (in total, 12.8 metric tons of e-waste), and large, end-of-life equipment, like washing machines, dryers, dishwashers, electric stoves and more weighing in at 11.8 metric tons.

Less than one-sixth of the e-waste was diverted to proper recycling (eCycling) facilities or to other agencies where the devices could otherwise be reused.

The amount of metals–including iron, copper, gold, silver and aluminum, among others–has a value of $52 billion in U.S. dollars. But within that mix are also dangerous waste, such as lead glass, mercury, cadmium, chromium and chlorofluorocarbon, which can lead to impaired mental development, cancer, and damage liver and kidneys.

To help eliminate your footprint in the growing mound of electronic waste, you can check out some tips on where you can appropriately dispose of your unwanted electronic goods. The Environmental Protection Agency’s eCycling page also provides a number of leads for properly trashing your electronics. In some cases, getting rid of or trading in gadgets and machines can lead to cash in your pocket or credit to your account that you can put toward a future purchase.