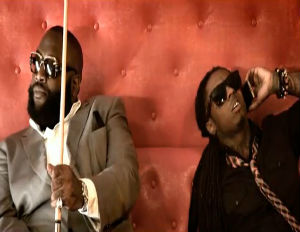 The gossip news site TMZ is reporting that Reebok has parted ways with the rapper Rick Ross over sexually violent lyrics in a song. He described taking advantage of a woman to whom he’d slipped the date rape drug widely known as “molly.”

“Reebok holds our partners to a high standard, and we expect them to live up to the values of our brand,” Reebok said in a statement given to TMZ. “Unfortunately, Rick Ross has failed to do so.”

Said Reebok, “While we do not believe that Rick Ross condones sexual assault, we are very disappointed he has yet to display an understanding of the seriousness of this issue or an appropriate level of remorse.”