How to Really Make Your Pitch Stick and Story Resonate 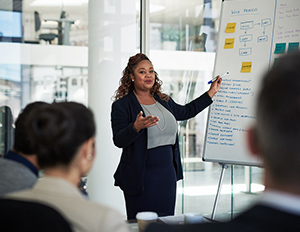 As the CEO of one of the world’s leading schools for business storytelling, I have seenÂ thousands of pitches duringÂ the past 15 years. Why do some ideas stick, while others get lost in translation? The following are some of the insights I’ve learned from working with clients such asÂ Google, NASA, General Assembly, and manyÂ others.

Selling a disruptive concept to the world requires a strategic pitch. The story you tell–the journey you take your audience on–has to leave them with hope that the best is yet to come. You’ve solved a problem they may not even realize they have, and that their life will be better because of your idea.

Here in Silicon Valley, disruption is a glorified term. Everybody wants to be a disruptor. But we forget that, as the messenger of innovation and disruption, you are basically telling the world (your audience) that they’re wrong. You’re saying, “No. The way we’re doing things is not working and it’s bad. But don’t worry, I have the answer.â€ Then we wonder why people don’t love us and embrace us as we needed, hoped, or expected them to.

This is the shadow of innovation and disruption. Remember, in order to become an innovator, at some point, you had to leave your place of comfort; your home; your culture of origin.

You woke up one day and thought, “Wait a second, this doesn’t make sense. I’m not going to live under this story, this environment. I’m not going to accept things the way they are. I don’t know what the answer is, all I know is it’s not this.â€

But in order to step out of the dominant, existing story you have to leave “the village.â€ So you go out into the wilderness and get lost in the desert. There are trials and tribulations. It’s like an initiation. Eventually, it’s a classic hero’s journey accompanied by all the things that come with such. But people don’t pay enough attention to the second half of the hero’s journey: after your trials and tribulations, after you’ve found your mentors, after you’ve slain the dragon and you’re standing on top of the mountain communing with the gods…

Michael Margolis is CEO of Get Storied,Â a narrativeÂ strategist toÂ Google, NASA, and innovatorsÂ who want toÂ get their storyÂ straight.