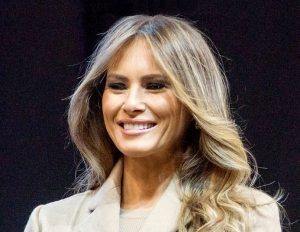 While the world looks at Trump as the “winnerâ€ of the presidential election, there is another silent winner–Melania Trump. Over 50% of white women voted for Trump, but what if they really voted for Melania?

Melania abruptly found herself made into an “executive woman,â€ with pop-up “businessesâ€ and decision-making power that may be out of her league. Frankly, it’s out of the league of anyone who hasn’t held public office or a full-time job in the last 15 to 20 years.

She told The New York Times that she would be a “traditional first lady,â€ like Jackie Kennedy. Â Good luck, girl–speeches, roundtables, dinners, Girl Scout campouts, Easter Egg rolls, and whatnot will replace cocktails at noon, and long leisurely summers on the yacht. She will feel what it means to be a modern American woman in a demanding workhorse culture. Â Who wouldn’t want to live this kind of American “dreamâ€?

I’m sure Melania is ecstatic about her new found role and the gift of First Lady from the American people. Â I see her secretly gushing over her revived “modelingâ€ career and gracing the covers of Vogue, Elle, and other women’s magazines, like Michelle did. A Melania White House would bring back traditional roles for women, giving them permission to be by their man’s side, while maintaining their femininity and independence.

Michelle came into the White House with sculpted, sleek arms, razor-sharp wit, intelligence, and–pastels. Â In the past, Melania bared it all. Â She has a unique opportunity to make the First Lady role her own by showing women how they, too, can be proud of their bodies and curves.

Perhaps, Melania will carve out her own role and leave Michelle’s in tact. But, some white women are expecting a lot from Melania….

Maryann Reid is the Digital Managing Editor of Black Enterprise magazine and author published by St. Martins Press. Her work has been featured in Glamour, USA Today, Newsweek, CNN.com, and more. Follow her on Twitter @realalphanista.

Your Child’s Reading Begins with Talking and Listening