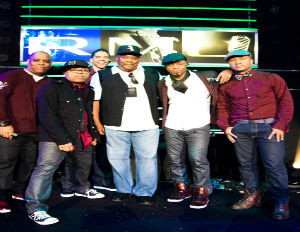 NFocus Entertainment President and CEO Mark Hill has a passion for what he calls “realâ€ music and he’s sharing that love via a new show called Real Music Live on NBC. The show, which premiered December 22nd and returned on January 5th, features performances by powerhouse singers who don’t use Auto Tune or any of those other studio enhancements.

“My goal with Real Music Live is to bring real music back,â€ said Hill. “You have all these artists from London winning all these awards. We (in the U.S.) have gotten away from real music. But we still have people like BeyoncÃ©, John Legend and John Mayer, who really have a concept to what their doing and I’m very excited about Luke James.â€

Mitchell, who has over 30 years of experience in the music industry, grew up immersed in soul. Members of the Emotions, and Earth, Wind and Fire all lived in the area of his Chicago neighborhood.

“My dad had musicians over the house all the time and I grew up being a drummer,â€ shared Hill. “Chicago is a real melting pot of musical genres. It went from disco to rap and hip hop and all of these different areas.â€

One of the biggest changes in the music industry, according to Hill, is the way that people purchase music.

“People have choices now. You can buy a song or two instead of the whole album,â€ noted Hill. “That’s definitely good for the buyer and it can be good for the artist too. Put good stuff out and people will buy it. ”

But Hill cautions artists that it’s not quite that simple. Of course you have record label executives to contend with in terms of distribution, marketing and even getting signed in the first place.

“Artists have to learn how to self-promote,â€ advised Hill. “Record companies aren’t signing artists like they used to.Â  You have to do your research and get people notice you. A lot of times record labels are looking to recreate whoever is popular at the moment. If you are bringing something different, they might not know how to promote you. They are scared of the unknown.â€

“Social media is very instrumental in how we are promoting the show and interacting with fans,â€ said Mitchell.

Who are your favorite “real” singers?