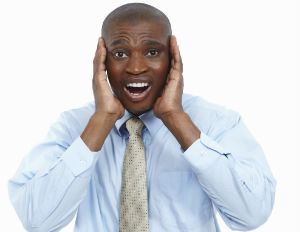 While President Obama received rave reviews for his final White House Correspondents dinner speech, host Larry Wilmore closed out his remarks with a joke that left the mostly-white audience choking on their champagne.

As he wrapped up his performance, the comedian reflected on experiencing the nation’s first black presidency.

“When I was a kid I lived in a country where people couldn’t accept a black quarterback,” Wilmore said. “Now think about that: A black man was thought by his mere color not good enough to lead a football team. And now to live in your time, Mr. President, when a black man can lead the entire free world.”

What started off as an innocent anecdote then took a sharp left turn.

“Words alone do me no justice. So Mr. President I’m going to keep it 100… Yo Barry, you did it my n-gg-,” Wilmore said, pounding his chest with his fist. “You did it.”

As expected, people had a lot to say:

Not that I’ve been asked to do so recently. But I will never appear on any program with @larrywilmore as a host. #Disgraceful #NerdProm – Van Jones (@VanJones68) May 1, 2016

I wish white people were as offended by police brutality and mass incarceration as they are by black people using the N-word. #WHCD

My new @DailyMail column, as suggested by @johnlegend, is about @larrywilmore dropping the N-word bomb on @BarackObama. Posting soon. – Piers Morgan (@piersmorgan) May 2, 2016

Seriously. What the hell did you think @larrywilmore was going to go there and do? Of course he went “there.” That’s what he does. – Shaun King (@ShaunKing) May 2, 2016

@Deray @marclamonthill My reaction to Larry Wilmore telling Pres Obama “Ima keep it , you did it my nigga” #WHCD pic.twitter.com/yJmqxeQJ3q – Faatimah Star (@FaahStar1) May 1, 2016

#MotivationMonday: How to Say â€œYesâ€ When All Signs Point to â€œNoâ€

How to Keep Your Debt From Spiraling