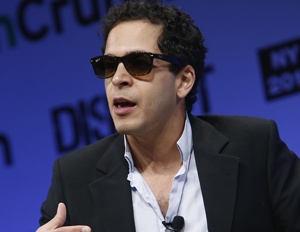 Mahbod Moghadam was a wild card at Rap Genius, and has been known to share his unkind opinions with a few millionaires.

After making tasteless annotations on the manifesto of California serial killer Elliot Rodger, Rap Genius co-founder Mahbod Moghadam has resigned from the company as well as its board of directors, effective immediately.

On Rap Genius’ site, CEO and co-founder Tom Lehman hasÂ posted an explanation of the decision.

Naturally, anyone can annotate it.

Elliot Rodger’s entire manifesto is posted on Rap Genius, where anyone can annotate it to clarify points or add relevant information. “Ultimately – we decided that it was worthy of close reading — understanding the psychology of people who do horrible things can help us to better understand our society and ourselves,” Lehman says.

Modghadam left comments ranging from “Beautifully written…” to “MY GUESS: his sister is smokin hot,” when Rodger wrote about his sister.

This isn’t the first time Moghadam has received some backlash for his behavior. In an interview on Valleywag, the Rap Genius co-founder said Facebook CEO Mark Zuckerberg could “suck his d**k.â€

The decision to have Moghadam step down was in line with Rap Genius’ code of conduct, although it’s rare to see it applied to the already controversial co-founder of the company. “Were Mahbod’s annotations posted by a Rap Genius moderator, that person would cease to be an effective community leader and would have to step down,â€ Lehman says.

Moghadam has taken to Twitter to apologize for the annotations.

I want to apologize to everyone. I need to hear these criticisms, reflect for real, and work on becoming a better person

My Desk Job is Better Than Yours? Research Explores the Topic