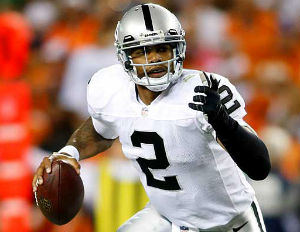 Terrelle Pryor suffered a knee injury and concussion that derailed the promise of his 2013 season -- but now he's without an agent.

When Raiders head coach Dennis Allen named Terrelle Pryor the week 17 starter against the Denver Broncos, the young quarterback viewed it as he should: as another opportunity to prove himself late in the season — a season in which he showed flashes of his potential but was hampered by injuries.

Only if his agent, Jerome Stanley of SAFE Sports Management, felt the same way.

He didn’t stop there.

Pryor fired him Wednesday. The news was first reported by Mike Garafolo of Fox Sports.

McGloin played well in his first start after Pryor went out with a Grade II sprain of his MCL, but started five more games after Pryor was healthy with mixed results. Pryor’s play, perhaps, became an emotional issue for Mr. Stanley, who spoke with a reporter for 10 minutes.

[Stanley] believes Pryor should have been allowed to develop despite on-field struggles. After his last start Nov. 10 against the New York Giants, Pryor had thrown eight interceptions without a touchdown pass. He struggled at times making reads. The read option proved less effective as the year went on, and defenses identified his penchant for rolling to his right.

His talent and top-end potential, however, is undeniable. The Raiders understand that, which is why Allen said he wanted to evaluate Pryor further next week against the Broncos.

While Stanley believes Pryor will show well when given the opportunity, he doesn’t believe the young quarterback has been given the best chance to succeed.

“I expect Terrelle Pryor to be a successful starting quarterback in the NFL,â€ Stanley said. “I expect that. I’ll be shocked if it didn’t happen. Terrelle Pryor is the best and most dynamic athlete in the NFL playing the quarterback position. He also has won games and been productive when given the opportunity. It’s not brain surgery. His coach stumbled upon a gem, the find of the season in Terrelle Pryor. He stumbled upon him and then he botched the discovery. It was ridiculous, just ridiculous.”

Tweeted Pryor: “I apologize for the recent comments towards the Raiders organization. That’s not what I’m about,â€ Pryor wrote. “I’m thankful for this opportunity given to me by this great organization and the phenomenal fans. I’m very excited to play with my teammates Sunday! We hope to make you (fans) proud [sic].â€

It’s not immediately clear if Pryor has begun a search for a new agent.

Oprah Winfrey And Bill Duke To Debut ‘Light Girls’ On OWN