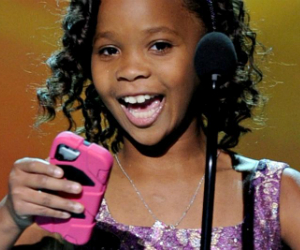 It’s being reported by Entertainment Weekly that Quvenzhane Wallis will take on the role of Annie in the big screen remake of the play, ‘Annie’, that was originally going to be played by Willow Smith.

Willow recently pulled out, according to Will Smith, who said, “Willow was supposed to be doing Annie, we got Jay-Z to do the movie, and Willow had such a difficult time on tour with ‘Whip my Hair’ and she said, ‘You know Daddy,’ I don’t think so.”

Quvenzhane Wallis is the youngest actress nominated for a Best Actress Oscar.

Read more at The Urban Daily

Mo’ Shade and No Tea: How to Slay the Rude Monster in Your Office