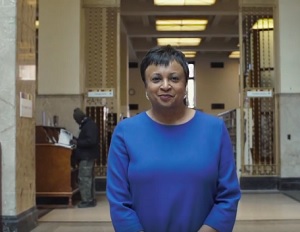 On Wednesday, President Obama announced his plan to nominate current CEO of Enoch Pratt Free Library, Carla Hayden, as the new head of the Library of Congress.

Serving as the leader of Enoch Pratt since 1993, Hayden will be the first woman and first African American to serve in this position in the institution’s 214-year history.

“Michelle and I have known Carla since her days working at the Chicago Public Library, and her dedication to learning and education is unparalleled,” Obama said in a Facebook statement.

In addition to praising her work, Obama made note of Hayden’s decision last year to keep the doors of the library “open as a beacon for the community” during the protests and riots that erupted following the death of 25-year-old Freddie Gray.

Credited with bringing the city’s library into the digital space, building a new annex at the Central Library, and renovating a number of neighborhood branches, Obama emphasizes just how critical Hayden will be in modernizing the infrastructure at the Library of Congress.

“Her understanding of the pivotal role that emerging technologies play in libraries will be essential in leading the Library of Congress as it continues to modernize its infrastructure and promote open access and full participation in today’s digital world,” President Obama said.

A graduate of Roosevelt University and the University of Chicago, Hayden started her career as a library associate and children’s librarian in 1973 and then transitioned to a young adult services coordinator with the Chicago Public Library in 1979. In 1995, she became the first African American to receive Library Journal’s Librarian of the Year Award and from 2003—2004 she served as president of the American Library Association. She was also nominated by President Obama in January 2010 to be a member of the National Museum and Library Services Board and confirmed by the Senate in June 2010.

“This is truly a great honor, to be nominated by President Obama to lead the nation’s library, the Library of Congress,” Hayden said in a statement. “It is my privilege to serve the Enoch Pratt Free Library and the citizens of Baltimore for more than 20 years, during which time we restored its world-renowned reputation.”

7 Must-Haves For Women of Power Summit

An Immersive Experience For HBCU Scholars at Apple