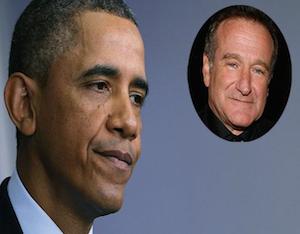 On Aug. 11, the world was shocked by the news that comedic genius, Robin Williams, died of an apparent suicide, according to a recent autopsy report.

As the tragic news started trending, more and more people began to realize just how important the 63-year-old performer was to their childhoods and overall lives. One person who took note on the impact Williams left on the world was President Barack Obama who immediately expressed his condolences to the family and friends of the Chicago-born actor/comedian.

Williams, who was the great-great-grandson of Mississippi senator and governor Anselm J. McLaurin, came into his own at Julliard and was one of only two students to be accepted into the advanced program at the school. The other student was the late, great Christopher Reeves. After leaving Julliard in 1976, Williams quickly found work alongside another comedy legend, Richard Pryor, who brought him aboard his short-lived sketch show in 1977.

The Oscar award winning actor (“Good Will Hunting”) starred in a host of film and television projects. Most recently, he played alongside Robert De Niro and Diane Keaton in 2013’s “The Big Wedding” and played President Dwight Eisenhower in “Lee Daniels’ The Butler.” President Obama summed up the nation’s overwhelming sadness at the loss of such a strong comedic star.

“Robin Williams was an airman, a doctor, a genie, a nanny, a president, a professor, a bangarang Peter Pan, and everything in between. But he was one of a kind. He arrived in our lives as an alien — but he ended up touching every element of the human spirit. He made us laugh. He made us cry. He gave his immeasurable talent freely and generously to those who needed it most — from our troops stationed abroad to the marginalized on our own streets. The Obama family offers our condolences to Robin’s family, his friends, and everyone who found their voice and their verse thanks to Robin Williams.”

Robin Williams is survived by his wife, Susan, and his three children.