Don't Waste Our Time, Postpone the National HBCU Week Conference, Says Pretty Much Everyone to Trump 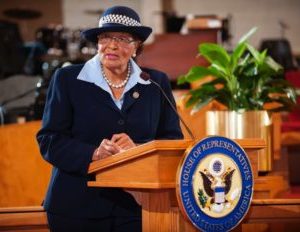 In an open letter to Trump, Adams wrote, in part:

“In light of recent events, I have reached the unfortunate conclusion that this year’s 2017 National HBCU Week Conference should be postponed.”

“Earlier this month, my colleagues and I asked the administration for an update on their progress regarding HBCUs. In February, the president signed an executive order outlining greater investments and additional resources for HBCUs. It has become painstakingly clear that these promises are not being kept.”

“In this current environment, and with zero progress made on any of their priorities, it would be highly unproductive to ask HBCU presidents to come back to Washington. I call on the president and Secretary DeVos to postpone this year’s conference until a serious effort has been made to advance issues important to HBCUs and their students.”


Adams isn’t the only one. Politico reported yesterday that “pressure is mounting on the White House” to delay the National HBCU Week Conference. Leaders of historically black colleges, the Congressional Black Caucus, and UNCF have also called for a postponement, but Politico says the White House has no plans to do so.

In a letter to Trump dated Aug. 1, Adams inquired about the progress of the White House HBCU Initiative, according to her office. That letter has not received a response.

Adams says she would like to see this administration move forward with the promises it made to HBCU leaders. The administration hasn’t yet addressed any of the requests for support that HBCU presidents presented to Trump during the February meeting. For these reasons, Adams feels that it would be unproductive to ask HBCU leaders to return to Washington for another photo-op.

A good first step would include the White House hiring an executive director for the Initiative and appointing the president’s HBCU Board of Advisors. Trump hasn’t yet hired an executive director—the last four administrations had hired one by July of their inaugural year.

Adams would also like to see support for legislation that has been introduced in Congress that seeks to close the funding gaps for HBCUs. She currently has a bill, the HBCU Capital Financing Act, which would provide necessary funds to schools to make capital improvements on their campuses.

Adams Keeps the Focus on Students

There also seems to be some pettiness involved. “Yesterday it was brought to our attention that a White House aide described Rep. Adams’s HBCU Braintrust, which she is hosting during the Congressional Black Caucus Foundation’s Annual Legislative Conference, as a ‘competing’ conference designed to undermine the administration’s event. He was quoted in Politico saying, ‘They’re doing an event to compete against the White House because they don’t want President Trump to have a victory,'” Hailey Berringer, Adams’s press secretary, said in an e-mail.

But Adams is taking the high road by keeping the focus on students.

“Let’s make sure that we keep the focus on HBCUs and the students they serve. Perhaps this is just another miscommunication within the administration,” a spokesperson for Rep. Adams said in an e-mail.

“I am fairly certain that someone in the White House is aware that almost 50 members of Congress are participating in the Congressional Black Caucus Foundation’s Annual Legislative Conference, which will take place for the 47th time this September in Washington. This will mark the third year that Rep. Adams has partnered with many influential nonprofit, corporate, and government leaders to advance the interests of HBCUs and the students they serve.”

According to Politico, even Johnny Taylor, president and CEO of the Thurgood Marshall College Fund, has called for the National HBCU Week Conference to be postponed. Taylor had arranged the meeting in February between HBCU presidents and Trump that was widely denounced as a photo-op.

Politico quotes him now as saying in a letter that “concerns related to recent national events” would make the HBCU conference “counterproductive.”

How to Stay Focused in a World of Political Distractions