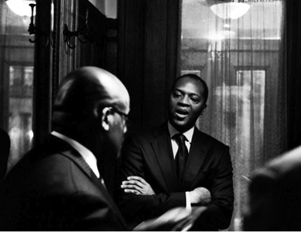 Current or last position: Vice President at the Center for American Progress

Notable political achievement (s): Expanded accessÂ toÂ critical aid programsÂ such as food stamps, WIC, and school lunches forÂ low-income families, during his tenure as deputy chief of staff of the U.S. Department of Agriculture. Was selected by President Obama to serve as political director of Democratic National Committee in 2009.

With the looming retirement of long-time Harlem Congressman, Charlie Rangel, quickly approaching, several candidates have emerged as hopefuls to succeed the Washington veteran. The newest contender to enter the race; Clyde Williams, formally announced his candidacy on Monday. A former deputy chief of staff of the U.S. Department of Agriculture, Williams began hisÂ political career in the White House as an aid to President Clinton in 1998.Â In 2001, at the request of Clinton, Williams made the move to Harlem to serve as his domestic policy advisor at the William Jefferson Clinton Foundation.

In addition to his work for the Clintons, Williams was also appointed political director of the Democratic National Committee by President Obama in 2009, andÂ has been a vice president at the Center for American Progress since 2005. Williams also founded the Harlem Small Business Initiative, which brings together prestigious private sector companies and the NYU Stern School of Business to mentor Harlem’s small businesses.

Williams first ran for Rangel’s seat in 2012.Â Despite glowing endorsements from both the New York TimesÂ and the Daily News, Williams was only able to gain 10% of the 2012 primary votes, coming in at a distant third place to Rangel and State Senator Adrian Espaillat, who each earned 44% and 41% respectively. Williams went on to endorse Rangel’s 2014 re-election effort, and is hoping Rangel will return the favor.

Williams has not released details regarding his official platform yet, but in his Monday announcement, he stressed the need to enhance and expandÂ “affordable housing, education and training opportunities, access to healthcare, and innovation to address persistent public safety issues.â€ Williams pledged to earn the trust of the voters comprising the 13th district, and toÂ “develop new, comprehensive solutionsâ€Â to their problems.

He also took shots at the local New York political scene, which has been run with an iron-clad fist by the often-clannish establishmentÂ politicians. Referring to these same politicians as aÂ “political machine that has failed to deliver,â€ Williams accused them ofÂ “letting problems fester for decades.â€ However, sharp rebukes will not be enough to secure him his party’s nomination in the June 28 primary. Despite Williams’ high-profile resume and connections, he does not have the same recognition among the 13th district voters as some of his rival candidates. Securing an endorsement from Rangel is crucial to Williams’ ability to win next year’s primary.