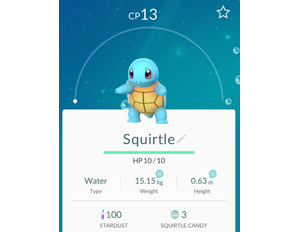 I, along with millions, spent a few hours the past weekend playingÂ PokÃ©mon Go.

The new mobile app, for the handful of people who may not know, lets users capture, battle, and train virtual PokÃ©mon (Japanese anime stuffed-animal-looking types) who appear throughout the real world.

The technology behind the app is augmented reality. The app uses a mobile device’s GPS to direct players to where PokÃ©mon are located.

I really wanted to dislike it just because of its irritatingly sudden status as the next biggest stupid thing in mobile gaming since Angry Birds.

Sure, the game is great for leisurely fun. But how long will it be before businesses use it as a marketing tool to reach a vast potential customer base?

And when I say vast, I mean immense. Downloads of PokÃ©mon Go reached 7.5 million in the U.S. alone in barely two days. The app is generating $1.6 million in revenue per day–and that’s only from iOS devices.

Large businesses follow the money scent. There will certainly be licensing opportunities–we are sure to see Squirtle in McDonald’s Happy Meals soon.

And, I imagine, quite a few movies studios are already assembling teams to craft ‘TheÂ PokÃ©mon Go Movie.’

An Idea for Small Business

But how can small businesses leverage this runaway success?

One obvious way would be for small retailers to make their establishments PokÃ©mon hideouts.

Businesses with virtual presence could perhaps offer PokÃ©mon to anyone visiting their site, online store, or downloading their app.

Ideally, it would be cool if a business could create their own, branded PokÃ©mon. I asked Niantic, the game’s developers, if anyone could create a PokÃ©mon for their location.

Interestingly, I wasn’t flat-out told no. The company’s response:

“Not at this time. Currently Pokestops [these are the places where Pokemon lurk] and Gyms [real world locations where PokÃ©mon engage in virtual battle] are generated from a combination of Google Maps’ interesting locations [historic sites, public works of art, etc.] and locations are submitted by players of Ingress [Niantic’s other Real World game] over the last four years.”

Which, to my interpretation means: not yet. Perhaps a way for small businesses and entrepreneurs to broaden their audience and customers base will soon be through customized PokÃ©mon?

Until then, we will have to suffer happily playing this ridiculously fun game as a past time.

Before You Hit Send: Should You Use Emojis And Emoticons At Work?