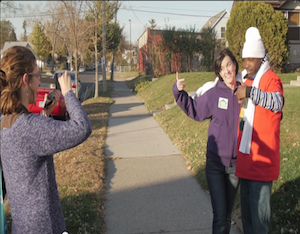 Currently trending as the No. 2 most talked about topic on Twitter in the United States is this story, which was buoyed by activist Shaun King:

Betsy Hodges, the mayor of Minneapolis, took part in a community effort to get Americans off their seat to vote. Hodges and the much respected Twin Cities charity, Neighborhoods Organizing for Change, went from door to door attempting to raise awareness about the importance of voting. While doing so, Hodges was seen taking a picture with Navell Gordon (above left), a young volunteer for the non-profit organization.

Gordon, a twice-convicted felon, has been a member of Neighborhoods Organizing for Change for the past two years. His charges stem from drug selling and firearm possession. He is under supervised probation until 2016. From taking that photo, KSTP and local law enforcement concluded that Hodges was publicly endorsing gang activity.

The intriguing parts to this story, which has been debunked by Shaun King at his Daily KOS site, are that Janee Harteau, Minneapolis’ chief of police, was there in a picture with Hodges and Gordon. The mayor even made the same gesture with another man before this story broke. While the mayor has declined interview requests, the question was put forth by Twitter and fellow activists wondering out loud why KSTP and local law enforcement would get behind such a flimsy story?

“Pointergate,” as the situation has been called, has gone viral and Twitizens from all over the country are speaking out in defense of Navell Gordon. KSTP issued a statement Friday saying it was merely “passing along information.” “Multiple sources from several law enforcement agencies told 5 Eyewitness News the photo had the potential for undermining the work they are doing on the streets,” the statement said.

Twitter has begun to deliver ether to KSTP-TV, the Minneapolis police, and anyone claiming that hand gestures done by black people are automatically gang influenced. We spotlight the 15 most humorous attempts at diffusing what is a pretty racially-charged situation and have KSTP-TV’s news account of the situation on the next page.

City Eats: Take A Taste Test Drive Through the â€˜6â€™

Chief-Angel-in-Charge: How One Woman Balances Day Job with Community Work