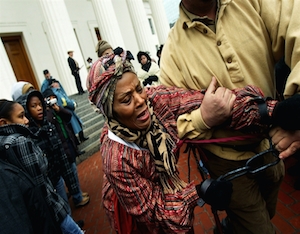 A year after a Connecticut school faced backlash for a controversial school trip, the parents of a student who was involved have taken to Change.org to call for an end to uncomfortable presentations about slavery.

James and Sandra Baker’s then-12-year-old daughter was a student at Hartford Magnet Trinity College Academy, when the Bakers say she was forced to participate in a school slavery reenactment. As reported by the Hartford Court and recalled by James on the site, the Bakers’ daughter and her 7th grade classmates were called the ‘N-word” and made to pretend to “pick cotton” and, according to Mr. Baker, “not make eye contact with the white masters.”

The child came home and was incredibly traumatized by the event. Together, the three have called upon the masses to help fight the school’s decision to engage in the program, according to Hartford’s WFSB. Nature’s Classroom, a 40-year-old residential environmental education program, was the location of the field trip and became a topic of discussion on Melissa Harris-Perry’s MSNBC show.

“As an African American parent,” Sandra Baker said, “I carefully consider how my children receive messages about racial identity.” Mrs. Baker’s testimony believed that Nature’s Classroom’s reenactment was so realistic that her daughter “did not know if the leaders were joking.”

The Bakers have since filed complaints with Connecticut’s Department of Education, Commission on Human Rights, and Office for Civil Rights. Now, as they call-for-action through Change.org, the petition, which has is currently live, needs 470 more signatures to fulfill its goal. Two years have passed since the initial kerfuffle and despite the attention and calls to ending the reenactments, Nature’s Classroom continues to stand by its practice of “teaching” children about slavery and America’s past.

Check out the petition by clicking here.

Prison Programmers: Inmates At San Quentin Learn How To Code