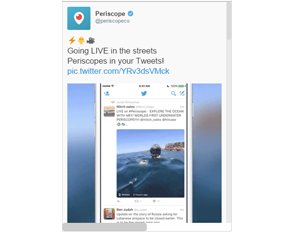 Black Enterprise’s Social Media Manager, Sirita Wright, applauds the new feature. “I love this feature!â€ she says. “For business owners and personalities with a large Twitter following, you now have a natural integration with autoplay that makes it easier to blend the audiences, instead of having to build a new audience from scratch. Most people detest having to leave one platform to view content on another, and Twitter has found a way to add more content to their platform and grow their Periscope user-base at the same time.â€

When you tap the video in a tweet, it goes full-screen and shows all of the comments and floating hearts.

There have been over 100 million broadcasts on Periscope since its launch in 2014. The then start-up was acquired by Twitter in 2015. The Periscope app has over 10 million accounts.

There are plans to roll out the feature to Android and web Periscope users, but the blog post does not get more specific other than, “as soon as they’re ready.â€