Penny Hardway Finds Success In Business & Back In School 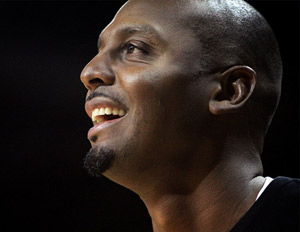 Although some assume the most notable of Anfernee “Pennyâ€ Hardaway‘s post-NBA endeavors may be his widely popular Nike Foamposites, he says the development of the Bottom Line Sports Show has brought him back into the national spotlight. After his highly successful basketball career started to slow down because of injuries, which resulted in six knee surgeries, Penny began to think about businesses he could start that would keep him financially stable. Since retirement, the Olympic gold medalist has opened a high profile salon and barbershop in Memphis and a celebrity fitness center, Terf Athletic Facility, in Miami, as well as launching a shooting skills website, Pennyandtheshotdoctor.com. He’s also been an analyst on NBA TV and most recently became the Executive Producer of the Bottom Line Sports Show. More information on Penny’s latest projects can be found on his official website Iam1cent.com, which launched shortly before the 2012 NBA All-Star Weekend and his Orlando Homecoming.

By setting up multiple streams of income, Penny continues to build a diverse portfolio that will benefit him for years to come, and that others may learn from. BlackEnterprise.com had the opportunity to catch up with the avid golfer after he returned from Michael Jordan’s Annual Celebrity Golf Invitational and he spoke about his post-retirement success and why it’s never too late to go back to school.

As I am still under contract with Nike, I am involved in the process through speaking to the guys that are building the shoes about what’s coming out next. They’ll show me some colors that have already been made and they’ll ask me what I like, what would I change, and what I would like to be added.

My favorite pair has to be the blue originals. When they first came out in the ’90s it was a shocker because that was before they even started making blue shoes. I also think the solid black and solid white colorways are pretty dope.

Some may be surprised at your post-NBA business portfolio. Which entrepreneurs, if any, do you look up to as business role models?

I have two people that I mainly look up to: Magic Johnson is one of them. He just blew everything out of the water. He didn’t make much money in basketball but since basketball has been over, he’s investing in the community and making a lot of money at the same time.

The next one I look up to is Sean Combs, who has always been a hustler. He never sleeps. He is always on the grind and I respect him for that. Let’s not take anything away from Russell Simmons or anybody like that but Puff just took those guys as his mentors and went harder.

You have several business projects, but you say that working with the Bottom Line Sports Show has really brought you back into the public eye. How did you start getting involved with the show?

It initially happened with them calling me and asking me for an interview. When I did the interview, it went so great; we could tell there was something that had to be built on. They called me back and asked if I wanted to be involved with the show. I accepted because it was the best interview I had ever had so I thought, “Man, this would be fun.â€ Later on, Gerald Brown, the show’s founder, asked me if I wanted to be an Executive Producer and I said sure. The show is growing, it’s a great show and it doesn’t degrade people, which I’m really proud of.

What do you see as the future of the show?

We are trying to do some big things with the Bottom Line Sports Show. It’s a matter of a few things happening the right way, getting the right look, the timing being perfect and once someone takes a chance on this show, I really believe it’s going blow up. We have all aspects that make a great show: the humor, the serious facts, knowledge, and more.

Career Tip of the Day: Keep an Accountability Record and Evaluate Yourself