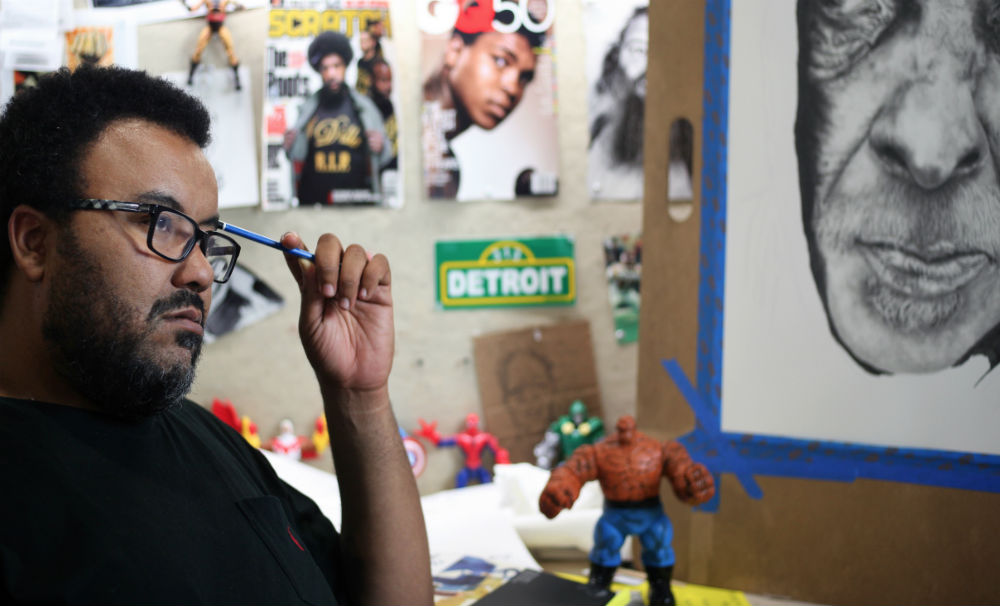 I have changed/contributed to my industry by: “Being a bridge builder for the next generation of African American photojournalists/videographers.”

Rashaun Rucker is an incredible creative who found his Renaissance life and in living color in the city of Detroit. A product of the prestigious North Carolina Central University, Rucker’s works, which includes photography, prints, and drawings, have garnered more than 40 national and state awards. His work almost always focuses on the underserved, the underrepresented, and the disenfranchised.

The first African American to win the Michigan Press Photographer of the Year in 2008, Rucker’s humanistic approach to capturing those aspects of everyday life that others fail to take the time to see is deeply rooted in a background inspired by a bevy of strong role models.

“My biggest inspirations as a man are my two grandfathers and my great-grandfather. They instilled my work-ethic within me, showing me nothing is given to you easily, to take pride in everything you do, what it means to be a provider and servant, and also about leadership,” Rucker says.

“My biggest inspiration as a journalist and artist would be photojournalist Gordon Parks and draughtsman/printmaker Charles White. Their impact on me came from their ability to capture all people, especially those in the African American community, with a sense of dignity, while being able to tell a story from the most honest and vulnerable places. Those lessons were only furthered by the late photojournalist, Hugh Grannum, my mentor at the Detroit Free Press, and Nancy Andrews, who hired me there. Nancy saw talent in me that I didn’t see in myself when she found me at North Carolina Central University,” he tells BE Modern Man.

It was at NCCU that Rucker’s craft began to take shape, setting the tone for a future of firsts.

“I attended North Carolina Central University, an incredible institution of higher education and a HBCU. I learned that I was going to have to work thrice as hard as the next person, because I didn’t attend a powerhouse journalism school. My alma mater didn’t even have a journalism major at the time, and I was majoring in fine art. The experience taught me that there is no substitute for hard work, and that there will always be doubters. I carry that lesson today as the father of two boys, one with special needs. You put one foot in front of the other and press toward the mark,” he says.

And these achievements were just a preview of what would later occur. A rising star in the world of photojournalism, Rucker’s consistent hard work documenting the everyday life of his fellow Detroitians would successfully pay off in a series of personal and professional accolades.

“It’s a toss-up between winning a national Emmy in 2008 for my photography in a documentary about pit bull culture in Michigan, and becoming the first and only African American to be named Michigan Press Photographer of the Year. The latter is probably the more rewarding achievement because of what it meant to my community. It also acknowledged the work of those African American photographers in Michigan before me, and that was important to me,” he says.

Those forefathers, whose tremendous character was instilled in Rucker, allowed him to see beyond himself and focus on the needs and wants of an underserved community of Detroit. “The two things I do to impact my community the most are, in journalism, my work as mentor on the National Association of Black Journalists Student Mulitmedia Project, and in art and visual communications, my work with Detroit’s homeless community,” he says.

“I have worked as mentor for years on the National Association of Black Journalist student project. It has been a blessing to help up-and-coming photojournalists and videographers. I have forged bonds and friendships with them, but more importantly, I’ve helped to guide their careers and place them in job opportunities. I always look forward to pulling up the next generation of visual journalists and also being renewed by their energy. It’s always gratifying to help someone avoid pitfalls and painful circumstances with the hopes they will provide that to this next person,” Rucker continues.

“In art and visual communications, I have done a great deal of work with the homeless community in Detroit, and continue to do so. The work was sparked by my older son’s battle with Autism. A large portion of Detroit’s homeless has mental disabilities. I have partnered with Mariners Inn, a homeless shelter and treatment center in Detroit, to practice a form of art therapy. I have spent the past two years drawing large and small portraits of Detroit’s homeless. I spend time during the week talking with them and taking photos. Some of the drawings feature their stories handwritten by them in their own words. To me, it’s about making us look at humanity; even at its lowest point. The drawings have raised several thousand dollars for the shelter. I continue to do work there and at several other nonprofits,” he says.

This artistic bridge that connects art, mentorship, and community will hopefully inspire the younger generation to view his narrative as one of gratitude and opportunity. “I believe I help to limit that broad-based painting by just being. I speak at a lot of community functions and mentor young journalists. I believe my biggest impact, outside of my words to them, is them just seeing me. Seeing someone who looks like you and someone doing what you want to do gives you the ability to believe in your dreams, which is invaluable. I didn’t know any black photojournalists coming up, but the moment I meet Keith Hadley at the Atlanta Journal-Constitution, I said, ‘I can do this.’ The mind is an amazing thing and having the ability to encourage yourself is awesome. The more we (our community) work in mainstream media, the more we write our own rich narrative,” Rucker tells BE Modern Man.

And these narratives are slowly becoming more visible, thanks to digital media that gives traditional journalists a non-traditional platform beyond the newsrooms to document, produce, and distribute their works. “There are very few African American photojournalists in our industry, especially in management positions like myself. It’s essential that I am represented, especially in large cities like Detroit that have high percentage of African American citizens. It’s a goal of mine and hopefully of others to have their newsrooms reflect their coverage areas, especially in this digital world we play in where our reach is greater than ever. I am proud to say that our photo/video staff is one of the most diverse in the country, which is a direct reflection of our department head’s, Kathy Kieliszewski, beliefs about diversity. It also reflects her trust in me to find some of these journalists and look outside the box. And not just for quotas, but to show us in a more positive light,” he tells BE Modern Man.

“I feel that this is an area where lots of work needs to be done. There is such a negative perception of us at times. We are often victims of those perceptions, whether its job opportunities or how the general public interacts with us (i.e. police officers). We (the mainstream media) need to do a better job at highlighting men of color who are making tremendous achievements in their communities. There needs to be a richer account of those examples in the mainstream outside the normal focus on athletes, musicians, and reality stars that offer an extremely narrow focus of who we are as men of color,” Rucker continues.

Rucker’s visual stories are needed to help weave the fabric of our being, and he feels the BE Modern Man platform will aid in nurturing and mentoring the next generation of visionaries, dreamers, and thinkers. As a father of two young boys, Rucker believes, “This is important because, our community, especially our young black men, need to see everyday heroes. They need to realize there is a cape on that teacher or social worker that is working hard to impact their lives, and that their world and dreams are bigger than they realize and can be achieved. It allows us to build each other up and control our destiny.”

BE Modern Man stories of diversity in different sectors are essential to producing and promoting well-rounded narratives surrounding the needs and desires of black men. “It’s an affirmation that I am moving in the right direction and impacting my city and community.’Show me your friends, and I will show you your destiny,’ a friend of mine always says. I’m humbled to among the exceptional men that Black Enterprise has honored,” Rucker says. “I truly believe it’s my practice of servant leadership. I find joy in cultivating others, helping someone to be the best version of themself; that will be my legacy. Each one, teach one.”

Rucker left us with these final poignant words, “Never stop believing in yourself. Stand tall and forever move forward. My grandmother always says, ‘Can’t nobody ride you unless your back is bent, so stand up and you will throw them off all the time.’”

AccuWeather GM and CMO Reveals The Road to Success